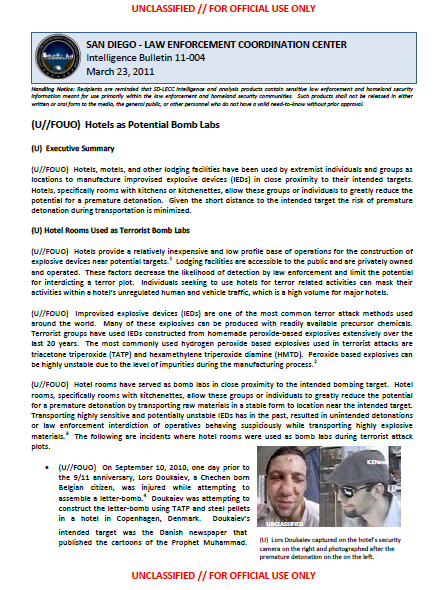 (U//FOUO) Hotels, motels, and other lodging facilities have been used by extremist individuals and groups as locations to manufacture improvised explosive devices (IEDs) in close proximity to their intended targets. Hotels, specifically rooms with kitchens or kitchenettes, allow these groups or individuals to greatly reduce the potential for a premature detonation. Given the short distance to the intended target the risk of premature detonation during transportation is minimized.

(U//FOUO) Hotels provide a relatively inexpensive and low profile base of operations for the construction of explosive devices near potential targets. Lodging facilities are accessible to the public and are privately owned and operated. These factors decrease the likelihood of detection by law enforcement and limit the potential for interdicting a terror plot. Individuals seeking to use hotels for terror related activities can mask their activities within a hotel’s unregulated human and vehicle traffic, which is a high volume for major hotels.

(U//FOUO) Hotel rooms have served as bomb labs in close proximity to the intended bombing target. Hotel rooms, specifically rooms with kitchenettes, allow these groups or individuals to greatly reduce the potential for a premature detonation by transporting raw materials in a stable form to location near the intended target. Transporting highly sensitive and potentially unstable IEDs has in the past, resulted in unintended detonations or law enforcement interdiction of operatives behaving suspiciously while transporting highly explosive materials.

(U//FOUO) Hotel rooms have also been used in the manufacture of other illicit materials. Production methods for clandestinely manufactured narcotics and poisons create a potential hazard for law enforcement and first responders. On January 21, 2010 a methamphetamine lab exploded in a Florida hotel room resulting in third degree burns to the suspects and significant damage to the hotel room. In 2008, an individual was arrested for manufacturing the deadly poison ricin in his Las Vegas hotel room.