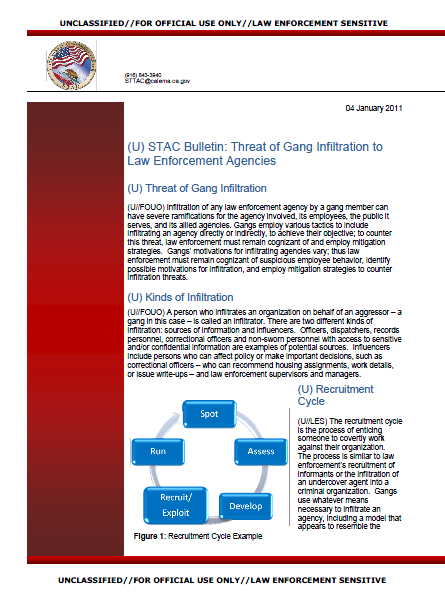 (U) Threat of Gang Infiltration

(U//FOUO) Infiltration of any law enforcement agency by a gang member can have severe ramifications for the agency involved, its employees, the public it serves, and its allied agencies. Gangs employ various tactics to include infiltrating an agency directly or indirectly, to achieve their objective; to counter this threat, law enforcement must remain cognizant of and employ mitigation strategies. Gangs’ motivations for infiltrating agencies vary; thus law enforcement must remain cognizant of suspicious employee behavior, identify possible motivations for infiltration, and employ mitigation strategies to counter infiltration threats.

(U) Kinds of Infiltration

(U//FOUO) A person who infiltrates an organization on behalf of an aggressor – a gang in this case – is called an infiltrator. There are two different kinds of infiltration: sources of information and influencers. Officers, dispatchers, records personnel, correctional officers and non-sworn personnel with access to sensitive and/or confidential information are examples of potential sources. Influencers include persons who can affect policy or make important decisions, such as correctional officers – who can recommend housing assignments, work details, or issue write-ups – and law enforcement supervisors and managers.

(U//FOUO) Infiltration is often seen in jails or prisons where officers and custodial staff have close and constant contact with inmates. Some inmates will try to build a relationship with a nurse or clerical staff member. In the field, officers must often build a rapport with gang members they encounter, as that rapport is established, some gang members may try to exploit the relationship.

(U//LES): Once the recruiter has assessed the insider’s vulnerabilities, the recruiter moves to the next phase in the cycle and begins to develop a relationship with the insider. It is in this stage that the recruiter exploits the insider’s vulnerabilities. An officer’s appreciation for the gang lifestyle, an association with inmates or gang members, blurred boundaries, and false sense of friendship or loyalty may create a forum for the recruiter to entice the officer. The recruiter may also begin to ask for small, seemingly innocent favors. The recruiter’s intent is to gain control and exploit the insider. They maintain control by helping the insider justify his/her actions and agency betrayal. An Orange County Prosecutor was caught providing sensitive case information to a Hells Angels drug-dealer in exchange for free trips to Las Vegas. He pled guilty to a charge of drug-trafficking conspiracy; he admitted being manipulated by the drug dealer and had not intended to cause harm.

(U//LES) Once the recruiter has developed a relationship with the insider, recruitment and/or exploitation begins, whether ambiguous or unambiguous. Ambiguous recruitment, which is unspoken and progresses “naturally,” is often seen in relationships where the insider’s motivations are typically personal (e.g., friendship, love, sex, etc.) Unambiguous recruitment is much more clear and concise. The insider and recruiter have clearly stated their relationship; the insider is often motivated by tangible gain (e.g., money, power, weapons, etc.) Once this has begun, the recruiter has successfully infiltrated an agency. Four Maryland correctional officers, and members of the Black Guerrilla Family, were arrested on Federal Racketeer Influenced and Corrupt Organization charges for smuggling contraband into two Maryland prisons in exchange for money and other compensation.