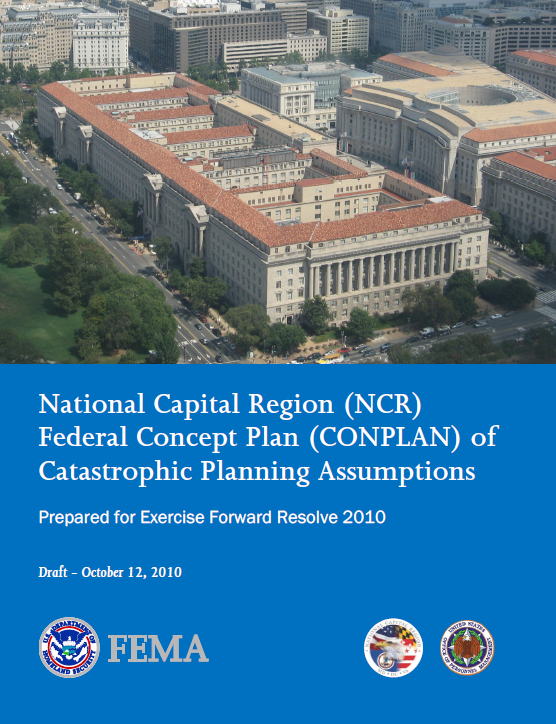 In the event of a catastrophic incident or threat to the National Capital Region (NCR), the significant federal presence would both necessitate and complicate a robust response. In order to facilitate the coordination that would be required for the integration of federal, state, and local response efforts, the Office of Personnel Management (OPM) and the FEMA Office of National Capital Region Coordination (NCRC) have compiled this draft NCR Federal Concept Plan (CONPLAN) of Catastrophic Planning Assumptions.

For planning purposes, a catastrophic incident is defined in the National Response Framework as any natural or manmade incident, including terrorism, which results in an extraordinary level of mass casualties, damage, or disruption severely affecting the population, infrastructure, environment, economy, national morale, and/or government functions.

In the event of the mass release of federal personnel or evacuation of the NCR, the Senate Sergeant at Arms (SAA) would work closely with the House and USCP to coordinate a response. SAA has scenario based processes in place to address specific threats. Typically, SAA and the Leadership Offices collaborate to come to a decision and present a course of action to Senate Leadership.

Each individual Senate office has the authority to make decisions independent of the recommendation of the SAA (e.g., Members may choose to release their own employees, activate COOP plans, etc.)

The CIA Security Protective Service has an established relationship with the Fairfax County Office of Emergency Management (FFX OEM), and the two agencies regularly coordinate and participate in joint exercises.

In the event of the mass release of federal personnel or an evacuation of the NCR, the Security Protective Service would coordinate with the local jurisdictions where CIA facilities are located through their emergency operations centers and with federal partners through established means of coordination. Examples include coordination with FFX OEM through the Fairfax Emergency Operations Center (FFX EOC) and the U.S. Park Police (USPP).

Duties of the U.S. Department of Justice during a catastrophic incident include:

The Department of State, Bureau of Diplomatic Security (DS) is responsible for the protection of the Secretary of State, other high‐ranking State Department officials, and is the Lead Federal Agency (LFA) for protection of foreign dignitaries below the rank of head of state. DS also has protective coverage for the U.S. Ambassador to the United Nations, designated as a Cabinet‐level position.

The Department of State has the following responsibilities:

In response to the mass release of federal personnel or evacuation of the NCR, the following list provides possible actions that could be taken by the Department of State: