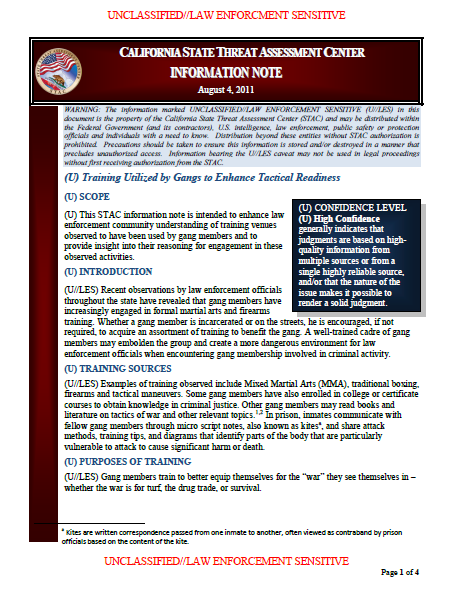 (U) Training Utilized by Gangs to Enhance Tactical Readiness

(U) This STAC information note is intended to enhance law enforcement community understanding of training venues observed to have been used by gang members and to provide insight into their reasoning for engagement in these observed activities.

(U//LES) Recent observations by law enforcement officials throughout the state have revealed that gang members have increasingly engaged in formal martial arts and firearms training. Whether a gang member is incarcerated or on the streets, he is encouraged, if not required, to acquire an assortment of training to benefit the gang. A well-trained cadre of gang members may embolden the group and create a more dangerous environment for law enforcement officials when encountering gang membership involved in criminal activity.

(U//LES) Examples of training observed include Mixed Martial Arts (MMA), traditional boxing, firearms and tactical maneuvers. Some gang members have also enrolled in college or certificate courses to obtain knowledge in criminal justice. Other gang members may read books and literature on tactics of war and other relevant topics. In prison, inmates communicate with fellow gang members through micro script notes, also known as kitesa, and share attack methods, training tips, and diagrams that identify parts of the body that are particularly vulnerable to attack to cause significant harm or death.

(U) PURPOSES OF TRAINING

(U//LES) Gang members train to better equip themselves for the “war” they see themselves in – whether the war is for turf, the drug trade, or survival.

(U//LES) Multiple gangs, such as the Mongols, Hells Angels (HA), Newhall 13, and Public Enemy Number One (PENI), are known to utilize MMA and boxing rings to enhance their fighting skills.4,5,6 It is not always clear if they began training and fighting prior to associating with the gang, during the process of becoming a member, or subsequent to their membership. Regardless of their initial reason for beginning a training regimen, and similarly to individuals associated with terrorist groups who participate in martial arts training, they consequently learn fighting techniques, maneuvers, and submission holds that can be used in the commission of a crime or against law enforcement personnel. Incarcerated members from a variety of gangs often occupy their free time with physical fitness training. Sureño gang members, however, are required by their superiors to maintain physical fitness by participating in a fitness routine while they are on the prison yard.

(U//LES) Incarcerated gang members continually train their bodies and their minds. In addition to physical fitness, they circulate and study kites which contain the gang‟s bylaws, history, and attack methods. The kites also often contain instructions for making weapons, planning attacks and targeting individuals (to include officers). Sureños have been known to read Gray’s Anatomy to learn the location of vital pressure points and main arteries as aim points during an attack. Criminal street gang members, prison gang members and individuals associated with Transnational Criminal Organizations (TCOs) study books such as The 48 Laws of Power and Sun Tzu‟s The Art of War to understand military tactics and to mentally prepare for the “war”. Gang members may also enhance their knowledge and mental training by reading books such as Blood in My Eye (a book written by George Jackson, one of the founders of the prison gang, Black Guerilla Family), The Book of the Five Rings (a book on kenjutsu and martial arts), and The Turner Diaries (a book written by William Pierce, former leader of National Alliance – a white nationalist organization – and used by Timothy McVeigh in planning the bombing of the Alfred P. Murrah Federal Building in Oklahoma City).

(U//LES) Additionally, known gang members have enrolled in criminal justice college courses to obtain additional training and education. These courses are typically open to the public and provide gang members with easy access to book knowledge as well as current or prior law enforcement and criminal justice personnel. This venue enables them to ask trained professionals about policies, procedures, tactical methods and prescribed levels of hand-to-hand combat training.