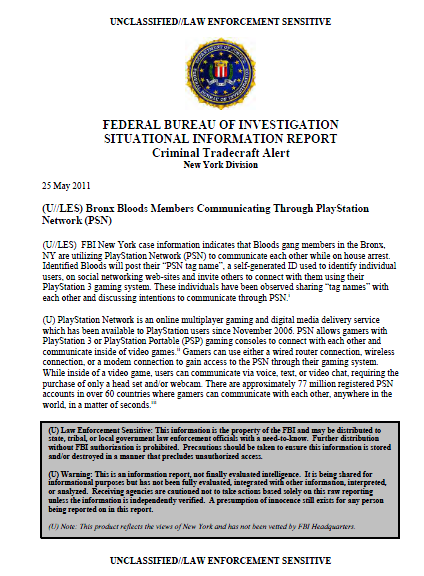 (U//LES) FBI New York case information indicates that Bloods gang members in the Bronx, NY are utilizing PlayStation Network (PSN) to communicate each other while on house arrest. Identified Bloods will post their “PSN tag name”, a self-generated ID used to identify individual users, on social networking web-sites and invite others to connect with them using their PlayStation 3 gaming system. These individuals have been observed sharing “tag names” with each other and discussing intentions to communicate through PSN.

(U) PlayStation Network is an online multiplayer gaming and digital media delivery service which has been available to PlayStation users since November 2006. PSN allows gamers with PlayStation 3 or PlayStation Portable (PSP) gaming consoles to connect with each other and communicate inside of video games. Gamers can use either a wired router connection, wireless connection, or a modem connection to gain access to the PSN through their gaming system. While inside of a video game, users can communicate via voice, text, or video chat, requiring the purchase of only a head set and/or webcam. There are approximately 77 million registered PSN accounts in over 60 countries where gamers can communicate with each other, anywhere in the world, in a matter of seconds.

(U) Some of the services provided by PSN to facilitate user communication include:

• (U) Friend List: Users can maintain a list of up to 100 additional players that allows them to keep track of their activity and alert them to when they are signed into their game.
• (U) Instant Messaging: Users can communicate via text conversations with other players signed into the same video game.
• (U) Multiplayer Gaming: Users can link up to seven PS3 controllers to their own gaming system and/or connect online with large groups of other players.
• (U) Voice/Video Chat/Cross Game Chat Rooms: Users can communicate to other players through Bluetooth/USB Headsets and/or PlayStation Eye/Eye ToyWebcams. (Analyst Note: Video chats only require a Webcam as they already have microphones built-in).
• (U) Internet Browser and Google Search Engine
• (U) Video download/sharing services
• (U) PlayStation Home: A virtual 3D social network gaming service allowing users to create a custom avatar, interact and connect with friends and other users in a virtual world. As of December 2010, there were approximately 17 million users and over 600 organized events held in this virtual world.
• (U) Facebook Access