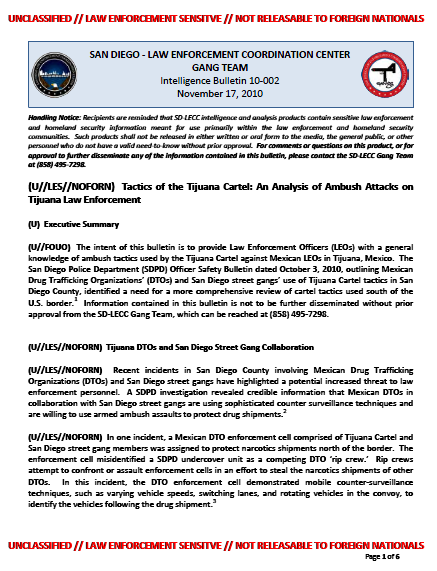 Tactics of the Tijuana Cartel: An Analysis of Ambush Attacks on Tijuana Law Enforcement

(U//LES//NOFORN) SDPD received credible information that the leadership of this DTO enforcement cell mistook the undercover law enforcement personnel for an opposing cartel ‘rip crew.’ Using push-to-talk communications, the enforcement cell called for additional San Diego street gang members to recover automatic weapons from a San Diego stash house and move to a preplanned location in Southeast San Diego. The cartel convoy then attempted to lead the suspected ‘rip crew,’ in this case undercover SDPD Officers, into an ambush at the preplanned location.

(U//LES//NOFORN) This bulletin is not intended to provide guidance or training in counter ambush or counter surveillance techniques to U.S. law enforcement. However, certain overarching principals pertaining to officer safety in an ambush situation have been outlined below.

(U//LES//NOFORN) In the Field:
• Keep the vehicle moving, never stop in the “kill zone”
• Always turn into the vehicle in the direction of a Blind Side ambush
• Keep your front seat clear to lay down or exit either door if under fire
• Consider your vehicle an offensive weapon
• When possible, travel in the far left lane
• Have one car length between you and the car in front of you while stopped in traffic
• Check mirrors for surveillance vehicles (especially SUVs and Vans)
• Watch for more than one vehicle traveling in tandem
• Alternate daily routine and routes
• Appoint a ‘counter-surveillance officer’ as part of a team during operations
• Conduct random security checks of law enforcement stations
• When there is an overt threat, use ‘overwatch’ techniques on calls, stops, and operations

(U//FOUO) The use of cartel ambush tactics and techniques against San Diego law enforcement is currently assessed low. The potential for San Diego and Imperial county law enforcement being targeted as a case of mistaken identity as a competing cartel or ‘rip crew’ is assessed as moderate based on the recent events in the San Diego region. Considering recent reporting of Mexican DTO and San Diego street gang collaboration, law enforcement operating in an undercover or surveillance capacity should consider increased surveillance and counter-surveillance training.