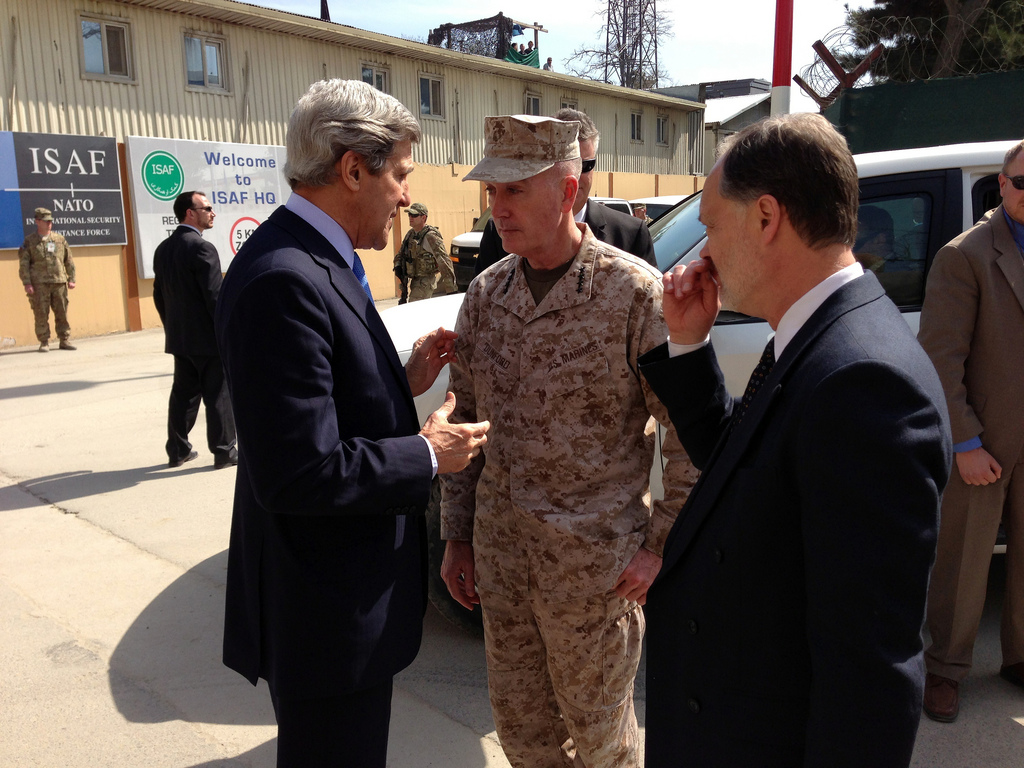 Afghan President Hamid Karzai’s recent refusal to sign a bilateral security agreement with the U.S. has fueled a growing sense of frustration and confusion among those charting the future of Afghanistan.  The agreement, which authorizes the continued presence of American troops in Afghanistan beyond 2014, has been described as “critical to Afghanistan’s future stability.”  One unnamed Afghan official quoted in a recent report from NBC News said that without the thousands of U.S. troops that are expected to maintain a presence in the country “the government could collapse and Afghanistan would enter a civil war.”  Former Ambassador to Afghanistan Ryan Crocker told Foreign Policy that he worries about a lack of “sustained administration engagement at a high level,” which has the potential to set the stage for a repeat of “pretty horrible” past events, referring to the civil war in the early 1990s that led to the Taliban’s rise to power.

While Karzai has signaled that he will likely sign the agreement, stating earlier this month that he wants to wait until after the April 2014 presidential elections, he continues to find new reasons for failing to do so, including most recently disagreeing with the U.S. government’s definition of terrorism.  Assuming the agreement is eventually signed, what does the future actually hold for the Afghan people?  Public Intelligence has obtained the most recent version of the U.S. Civil-Military Strategic Framework for Afghanistan, the second revision of the document dated August 2013, detailing the U.S. government’s goals and priorities for rebuilding Afghan society.  Issued by the U.S. Ambassador to Afghanistan James Cunningham and signed by the commander of U.S. forces Joseph Dunford, the framework covers U.S. priorities related to governance, the rule of law, socioeconomic development as well as the gradual transfer of authority to the Afghan government.  When compared with a previous version of the framework from March 2012, also obtained by Public Intelligence, the document solidifies the prospect of long-term U.S. involvement in Afghanistan, removing optimistic statements about turnover dates and self-sustaining funding estimates and replacing them with measured assessments reinforcing the notion that U.S. and international forces will be present in Afghanistan far into the next decade.

The U.S. Civil-Military Strategic Framework for Afghanistan has evolved substantially since its first edition, issued by Ambassador Crocker in March 2012.  The document has abandoned much of its original optimism to embrace a more grounded view of the realities of a war-torn developing nation.  The most recent version of the U.S. Strategic Framework, revised in August, places a much greater focus on the process of transferring power to Afghan authorities, emphasizing  “transition” as a guiding concept of U.S. operations in the country.  Transition is defined as shifting “security responsibility for Afghanistan to the Afghan Security Institutions (ASI) and the Afghan National Security Forces (ANSF)” as well as embracing a “more traditional diplomatic and development model” for U.S. efforts.  According to the framework, much of this will be achieved during the so-called “Transformation Decade,” a period from 2015-2024 that will see Afghanistan working to reduce its dependence on “international assistance, improving delivery of government services, and promoting fundamental freedoms and human rights.”  By 2025, the framework envisions Afghanistan having “reduced its dependence on international assistance in non-security sectors to levels consistent with other least developed nations,” increasing “peace and stability” through “effective development” and improving the “delivery of government services.”  By 2030, this transformation will allow Afghanistan to “emerge as a model of a developing democratic Islamic nation.”

Despite its optimism, the framework is remarkably frank about its diminishing expectations for Afghanistan, noting that even with “a strong partnership between the U.S. and Afghanistan, the Transformation Decade will be fraught with challenges” requiring “constant evaluation.”  Even under “the best of circumstances,” the framework says “Afghanistan will continue to be in the category of ‘least developed nations’ with high levels of poverty, unemployment, and illiteracy, as well as underdeveloped infrastructure.”  Moreover, the nation will continue to be threatened by “non-state actors” that will decrease stability and challenge the Afghan government’s capacity to govern.

The U.S. Strategic Framework is conceived of as a structure with a foundation and three pillars that support long-term U.S. strategic goals in Afghanistan.  The structure is founded on security, which focuses on “creating an environment that enables progress in governance, rule of law, and socio-economic development.”  The process of supporting Afghan security involved a gradual transition over time from operations led by NATO International Security Assistance Force (ISAF) personnel, to partnered combat operations, to the current state “where ANSF is leading combat operations.”  This transition has been achieved through a series of “tranches” that have involved specific provinces and districts within Afghanistan taking responsibility for the security of their own area the country.  The final tranche was announced in June 2013 indicating that all districts have now begun the process of “security transition.”

The viability of this transition remains to be seen as U.S. troops have previously voiced concerns about the readiness of Afghan forces.  A 2012 survey of several U.S. Army companies stationed in Khost and Paktiya provinces found that nearly half of soldiers surveyed said the Afghan National Army (ANA) had improved little, not much or not at all during their partnership.  Many soldiers cited in the report list Afghan forces’ lack of motivation and rampant illiteracy as factors undermining their training efforts.  Nearly 62% of soldiers responding to the survey said that so-called “ANA-led” missions are rarely or never actually planned and executed by Afghan forces.  One soldier quoted in the survey described how a recent “ANA-led” mission required him to “spoon-feed” his Afghan counterpart the entire operations order and planning.  “We do the heavy lifting, they put a face on it,” another soldier said. 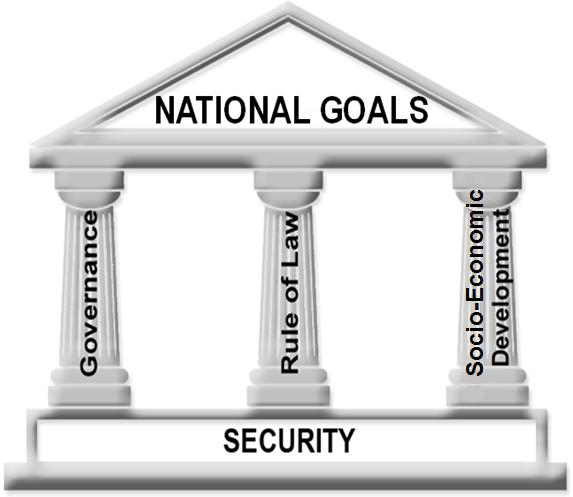 A graphic depicting the theoretical structure of the U.S. Civil-Military Strategic Framework for Afghanistan.

There are also a number of significant challenges threatening the “three pillars” of the U.S. Strategic Framework.  The governance pillar, which is particularly important to the future of Afghanistan, is primarily focused on strengthening the “Afghan people’s confidence in their government” by working to enhance its legitimacy and eliminating corruption.  The U.S. hopes to do this by supporting a “credible” and “transparent” election in 2014, when Afghan President Hamid Karzai will finally be forced to step down from his position.  The U.S. will also work to build Afghan government infrastructure from the ground up, strengthening “governance architecture and functionality, revenue collection and budget prioritization, execution, and accountability at both the national and sub-national levels, leading to more efficient, effective, and accountable service delivery for all Afghan citizens.”

Much of the success that will come from strengthening Afghan governance will depend on the second pillar of the U.S. framework: the “rule of law.”  This requires that the U.S. and Afghan government work to create a justice system providing access to “fair, efficient, and transparent justice based on Afghan law and international obligations” while also minding the “linkages between formal and customary justice” currently operating in the country.  The existing structure of Afghan justice is poor after “over thirty years” of “social and political upheavals, corruption, and technical and material deprivation.”  Afghans have little “confidence in their governments’ ability to provide fair, efficient, and transparent justice to all citizens” which discourages “economic growth by deterring investment and licit business opportunities.”  The rampant corruption throughout Afghanistan is a significant factor in this lack of trust, enabling a system of informal justice that often exploits “society’s most vulnerable members,” delegitimizing the Afghan government and making “harsh justice more acceptable to many Afghans.”

The final pillar of the U.S. framework focusing on socioeconomic development will depend largely on the success of U.S. initiatives to strengthen the legal and governance environment in Afghanistan.  A growing economy is described by the framework as increasing “stability within Afghanistan and the broader region” by providing jobs as well as “an adequate tax base to fund government-provided services.”  Economic growth will help bolster people’s confidence in the Afghan government, providing for “healthy and educated Afghans with jobs” that are able to provide for their families, making them “less likely to participate in the insurgency.”  The U.S. hopes that this will be accomplished through support of several key industries in Afghanistan, including telecommunications and extractives.  The original version of the U.S. Strategic Framework from March 2012 places heavy emphasis on the potential for cultivating Afghanistan’s extractives industry, which has previously been estimated to be worth trillions of dollars.  “Development of minerals and hydrocarbons is Afghanistan’s best chance to draw foreign investment and reduce its dependence on foreign assistance,” the March 2012 version of the framework states.  This development will “increase demand for the construction of regional rail, road, and energy networks that can generate significant revenue and create jobs.”  However, it will be at least “five to ten years” before the Afghan government begins to “realize revenue from its significant mineral deposits.”  In the interim, U.S. policies will support “trade policy liberalization, commercial law development, customs process reform” and “removal of barriers to cross-border trade.”