The following self-learning course from the U.S. Army Military Police School, which was formerly located at Fort McClellan, describes procedures for military police involvement in civil disturbance operations.  The course makes it clear that temporary detention facilities in the event of a civil disturbance overloading local resources would be operated under existing military doctrine for internment facilities.  The course cites U.S. Army FM 3-19.40 Internment/Resettlement Operations, which is now numbered FM 3-39.40 since its most recent revision in 2010, as the primary reference for the operation of these facilities. 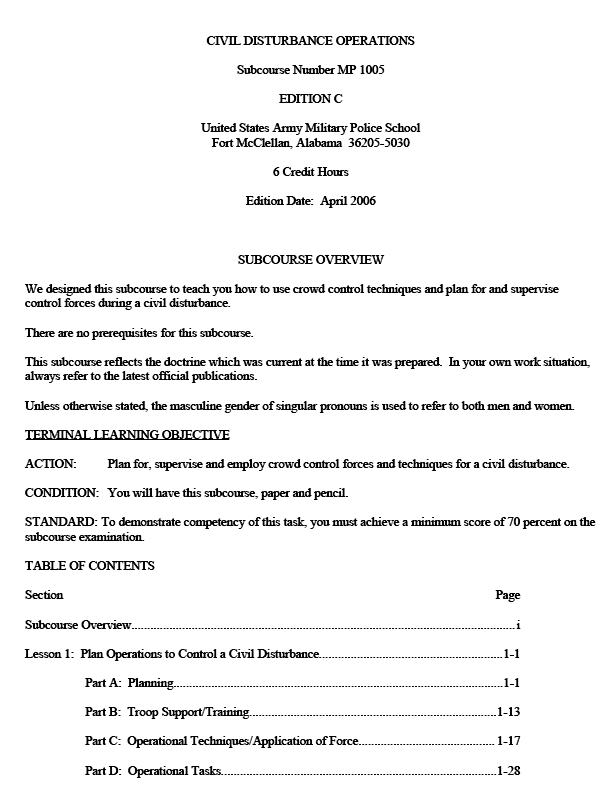 This lesson is designed to describe the nature and causes of disaffection and social unrest; define the potential for social unrest in the United States; identify the types of confrontations; define crowd behavioral and psychological influences; identify patterns of disorder.

(1) Civil disturbance operations by federal forces will not be authorized until the President is advised by the highest officials of the state that the situation cannot be controlled with nonfederal resources available. The mission of the control force is to help restore law and order and to help maintain it until such time as state and local forces can control the situation without federal help. In performing this mission, the control force may have to actively participate, not only in subduing the disturbance, but also in helping to detain those responsible for it. Control force commanders are authorized and directed to provide such active participation, subject to restraints on the use of force.

(2) Prior to committing any federal forces in the quailing of civil disturbance whether in CONUS or OCONUS commanders should train and continually brief the control force on the rule of engagement (ROE). The commander is responsible for drafting, interpreting, disseminating, and training the control force on the ROE. The staff Judge Advocate (SJA) should be included in the ROE development to ensure that it will not improperly constrain actions, but still will remain consistent with domestic and international laws, polices, and orders of the chain of command.

(3) If non lethal weapon and munitions are to be utilized, they should be addressed within the ROE and disseminated to the lowest level, preferable to platoon and squad levels. This requires that all personnel have a clear understanding of the ROE and the commander’s intent.

(4) While serving with a multinational operation under the preview of the United Nations (UN) charter or customary international law the UN will may mandate certain restrictions on the use of force. By the use of overwhelming force during a civil disturbance under the UN may compromise diplomatic efforts to reach a peaceful solution. Commanders must beware that any confrontation of the ROE made by soldiers can have strategic political implications on current and future operations.

(5) The primary rule which governs the actions of federal forces in helping state and local authorities to restore law and order is that the control force use only the minimum force required fulfilling the mission. This chief principle should control both the selection of appropriate operational techniques and the choice of options for arming the control force. In carrying out this principle, the use of deadly force is authorized only under extreme circumstances where certain specific standards are met. To emphasize limitations on use of firepower and to restrict automatic fire, rifles with only a safe or semiautomatic selection capability or modified to such a capability will be used as a basic weapon for Soldiers in a civil disturbance area.

b. Use of Deadly and Non-deadly Force.

(1) Commanders are authorized to use non-deadly force to control the disturbance, to prevent crimes, and to detain persons who have committed crimes; but the degree of force used must be not greater than that reasonably necessary under the circumstances. The use of deadly force, in effect, invokes the power of summary execution and can, therefore, be justified only by extreme circumstances. Accordingly, its use is not authorized for the purpose of preventing activities which do not pose a significant risk of death or serious bodily harm. If a mission cannot be accomplished without the use of deadly force, but deadly force is not permitted under the guidelines authorizing its use, accomplishment of the mission must be delayed until sufficient non-deadly force can be brought to bear. All the requirements of paragraph (b), below, must be met in every case in which deadly force is employed.

(2) The use of deadly force is authorized only under conditions of extreme necessity and as a last resort when all lesser means have failed or cannot be reasonably be employed. Deadly force is justified under one or more of the following circumstances:

(a) Self- defense and defense of others. When deadly force reasonably appears to be necessary to protect law enforcement or security personnel who reasonably believe themselves or others to be in imminent danger of death or serious bodily harm.

(b) Assets involving national security. When deadly force reasonably appears necessary to prevent the actual theft or sabotage of assets vital to national security. DoD assets shall be specifically designated as “vital to national security” only when their loss, damage, or compromise would seriously jeopardize the fulfillment of a national defense mission. Examples include nuclear weapons; nuclear command, control, and communications facilities; and designated restricted area as containing strategic operational assets, sensitive codes, or special access programs.

(c) Assets no involving national security but inherently dangerous to others. When deadly force reasonably appears to be necessary to prevent the actual theft or sabotage of resources, such as operable weapons or ammunition, that are inherently dangerous to others; i.e., assets that, in the hands of an unauthorized individual, present a substantial potential danger of death or serious bodily harm to others. Examples include high risk portable and lethal missiles, rockets, arms, ammunition, explosives, chemical agents, and special nuclear material.

(e) Arrest or apprehension. When deadly force reasonably appears to be necessary to arrest, apprehend, or prevent the escape of a person who, there is probably cause to believe, has committed an offense of the nature in (2) through (4) above.

(f) Escapes. When deadly force has been specifically authorized by the Heads of the DoD Components and reasonable appears to be necessary to prevent the escape of a prisoner, provided law enforcement or security personnel have probable cause to believe that the escaping prisoner poses a threat of serious bodily harm either to security personnel or others.

(3) Every Soldier has the right under the law to use reasonably necessary force to defend himself against violent and dangerous personal attack. The limitations of this paragraph are not intended to infringe on this right, but to prevent the unauthorized or random use of other types of deadly force.

(4) In addition, the following policies regarding the use of deadly force will be observed:

(b) Warning shot will not be fired.

(c) When a firearm is discharged it will be fired with the intent of rendering the person(s) at whom it is discharged incapable of continuing that activity or course of behavior prompting the individual to shoot.

(d) Shot will be fired only with due regard for the safety of innocent bystanders.

(e) In the case of holstered weapons, a weapon should not be removed from the holster unless there is reasonable expectation that use of the weapon may be necessary.

(5) Even when its use is authorized, deadly force must be used only with great selectivity and precision against the particular threat which justifies its use. For example, the receipt of sniper fire, however deadly, from an unknown location can never justify “returning the fire” against any or all persons who may be visible on the street or in nearby buildings. Such random response is far too likely to result in accidents among innocent bystanders or fellow law enforcement personnel; the appropriate response is to take cover and try to locate the source of the fire so that the threat can be neutralized.

(1) The Army will not operate facilities for confinement, custody, or detention of civilian personnel apprehended for violation of local or state laws as long as civil confinement facilities, operated by the Department of Justice, state, or local agencies are sufficient to accommodate the number of persons apprehended.

(2) When it appears that available local facilities are insufficient, due to the large number of persons apprehended or detained, and this fact can be verified by the person or agency responsible for the facilities, temporary confinement/detention facilities may be operated with prior approval from DA, specifically, the Chief of Staff, U.S. Army. These facilities will be operated only until custody of the persons detained can be transferred to and assumed by civil authorities. They will not be used for the confinement of persons charged or convicted under civil jurisdiction.

(3) Temporary confinement/detention facilities can be developed from local federal facilities provided they are adaptable to the requirements of custody and control. Such facilities should be established, if possible, within the affected area; this will conserve time, transportation, and escort personnel. However, if no suitable federal property is available within the affected area, they can be located elsewhere on any property under federal control as long as the persons to be detained are apprehended in the affected area. Whenever such temporary facilities are established during civil disturbance control operations, the Army is responsible for providing those personnel, facilities, and supplies necessary for the custody, control, health, comfort, and sustenance of persons detained.

(4) Officers and key NCOs specifically trained and experienced in confinement operations are required to operate such facilities. Guards and support function personnel operating under the direct control of such officers and NCOs need not be specifically trained or experienced in confinement operations as long as they are under close and continuing supervision of trained responsible personnel. Whenever females are detained, they must be held in physically separate detention facilities and under the control of selected female guards operating under the supervision of trained and experienced confinement personnel.

(5) Temporary detention facilities should be constructed and arranged to provide for adequate custody, control, and safety of detainees. It is advisable to use existing permanent-type buildings. Where sufficient permanent structures are not available, only that amount of new construction required for temporary custody, control, and administration of prisoners should be accomplished. Temporary fieldtype facilities provide compartments to assure effective control.

(6) The same operational procedures that apply to the operation of installation confinement facilities and treatment of detainees apply to these temporary facilities except that those policies and procedures establishing training, employment, mail and correspondence, and administrative discipline requirements will not apply. Detailed guidance in procedures for confinement of detainees is contained in EPW Operations, FM 3-19.40.