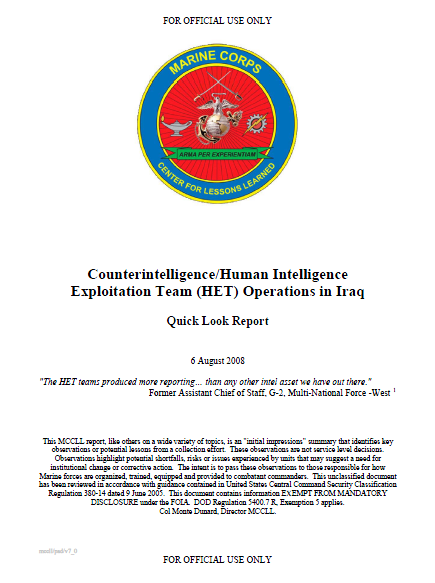 HET is viewed as a highly valuable and effective intelligence generating asset which, in conjunction with other intelligence sources, provides a significant amount of actionable intelligence during operations in Iraq. “The HET teams produced more reporting … than any other intel asset we have out there.” “HETs have been the pointy tip of the spear in this counterinsurgency fight. Two-thirds of MNF-W operations are directly driven by HET operations.” Key observations from this collection include the following.

• Short dwell times in CONUS between HET personnel deployments required a prioritization of mission oriented training over annual training requirements and professional military education (PME).
• Interviewees stated that the addition of the counterintelligence (CI)/HUMINT SNCO to the TTECG staff has resulted in the insertion of more realistic HUMINT scenarios during Mojave Viper (MV). HETs typically link up with their supported battalions for the first time at MV.
• 1st Intelligence Battalion and CI/HET Company leaders stated that they were manned at 70% of their linguist requirements, and that time for language training was insufficient: “There’s just not enough time for the language piece.”
• Interviewees stated that very little HUMINT is being gathered by Marines from the female portion of the Iraqi population. Without female CI/HUMINT Marines, it is difficult to gain access to Iraqi females in view of cultural norms relating to females being alone with males not related to them. The majority of those interviewed favored allowing women into the CI/HUMINT field.

The remainder of this report contains more detail and recommendations on the above and other topics.

This in-theater collection was conducted in Iraq over a 60 day period from April to June 2008, and was a continuation of the focused collection effort on units participating in Operation Iraqi Freedom and Operation Enduring Freedom (OIF and OEF), as directed by the Deputy Commandant for Combat Development and endorsed by the Commanding Generals, I and II Marine Expeditionary Force. The collection sought to examine the mission, scope, successes, shortfalls, equipment, manning and emerging issues associated with human intelligence exploitation teams that deployed to Iraq during OIF 08.1.

The CI mission is to conduct counterintelligence activities to identify and counteract the threat posed by foreign intelligence capabilities and by organizations or individuals engaged in espionage, sabotage, subversion or terrorism. The HET mission is to collect and report timely, accurate and mission focused information from human sources in order to fulfill tactical, MEF, theater and national level intelligence requirements.

With a dwell time in CONUS of five months between seven month deployments, completion of pre-deployment training was challenging for the members of CI/HUMINT Company, 1st Intelligence Battalion from which the HETs were sourced. Post-deployment leave and multiple holidays further reduced available training time. To successfully complete mission specific training, annual training and professional military education (PME) were sacrificed. Time available for language and cultural training was viewed as insufficient. The cumulative effect of multiple deployments added to the impact of a short PTP period for CI/HUMINT Marines.

MCCLL note: Commenting on a draft of this report, the lead CI/HUMINT officer at Intelligence Department (IOC), HQMC noted that, “The high operational tempo affects not just CI/HUMINT Marines, but the entire intelligence community. Our SIGINT Marines are currently in a 1:0.9 dwell right now as opposed to a 1:1 for CI/HUMINT.”

Pre-deployment training was viewed as effective in achieving mission specific training goals. Mojave Viper served as a cohesion building experience for HETs and their supported battalions, and provided an opportunity to educate the battalions on HET capabilities. The addition of the CI/HUMINT SNCO to the TTECG staff resulted in the insertion of more realistic HUMINT scenarios during MV. Some HET Marines expressed the opinion that they did not need MV military operations in urban terrain (MOUT) and tactical training but rather just the FINEX. Specialized courses provided by private contractors received positive reviews. These courses included the interrogation and source operations course provided by C-HET Solutions; the Reid Associates Detainee Operations Course and the Harris Radio Course.

Interviewees stated that training for Mine Resistant Armor Protected (MRAP) vehicles, crew-served weapons, language and cultural knowledge was insufficient. Limited training time was most often cited as the problem. The extended length of time needed to develop an effective language capability was a strong concern since this is considered a critical HET skill.

MCCLL note: The Tactical Iraqi Language and Culture Training System (TILTS) is a personal computer based, scenario-oriented software program that can be used for pre-deployment or in-country training to give Marines a usable grasp of Iraqi culture, gestures, and situational language. The goal of TILTS is to shrink language and cultural training time from several months of traditional classroom learning to 80 hours or less of hands on computer based interactive training. This training can be taken in increments, integrated with existing pre-deployment training. Other languages available are Pashtu, Dari and French. Commenting on a draft of this report, the Operations Officer, Center for Advanced Operational Cultural Learning (CAOCL) notes that “CAOCL has developed a multitude of other classroom and distributed learning (DL) training products. TLTS is a DL product designed for use as a tool in-conjunction with other CAOCL sponsored training modules in an overall blended learning environment with respect to the PTP Continuum,” that CAOCL can provide units targeted training, and that language and regional expertise requirements must be identified far enough in advance so that required training and funds can be projected.

HETs in direct support of infantry battalions are dependent on their supported battalion for mobility and security. With Iraqi Security Forces (ISF) assuming increasing responsibility for security, and as USMC infantry units begin to go into an overwatch posture, HETs are faced with the challenge of how to continue to operate in their AO. There is a strong feeling that HETs should be provided with their own organic mobility and security in the future. At the start of the OIF 08.1 deployment, 1st Intelligence Battalion recruited a convoy security element from infantry and reservists who volunteered to deploy for this purpose. This test concept proved effective but is probably not the long term solution needed. Those planning to deploy HETs in upcoming deployments must consider their mobility and security needs in a changing operational environment.