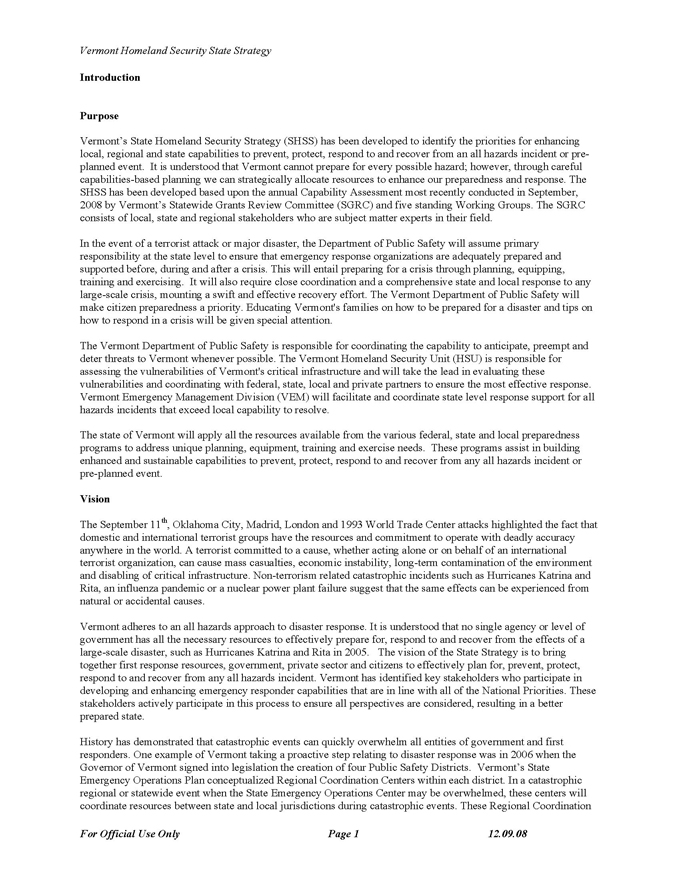 Vermont’s State Homeland Security Strategy (SHSS) has been developed to identify the priorities for enhancing local, regional and state capabilities to prevent, protect, respond to and recover from an all hazards incident or preplanned event. It is understood that Vermont cannot prepare for every possible hazard; however, through careful capabilities-based planning we can strategically allocate resources to enhance our preparedness and response. The SHSS has been developed based upon the annual Capability Assessment most recently conducted in September, 2008 by Vermont’s Statewide Grants Review Committee (SGRC) and five standing Working Groups. The SGRC consists of local, state and regional stakeholders who are subject matter experts in their field.

In the event of a terrorist attack or major disaster, the Department of Public Safety will assume primary responsibility at the state level to ensure that emergency response organizations are adequately prepared and supported before, during and after a crisis. This will entail preparing for a crisis through planning, equipping, training and exercising. It will also require close coordination and a comprehensive state and local response to any large-scale crisis, mounting a swift and effective recovery effort. The Vermont Department of Public Safety will make citizen preparedness a priority. Educating Vermont’s families on how to be prepared for a disaster and tips on how to respond in a crisis will be given special attention.

The Vermont Department of Public Safety is responsible for coordinating the capability to anticipate, preempt and deter threats to Vermont whenever possible. The Vermont Homeland Security Unit (HSU) is responsible for assessing the vulnerabilities of Vermont’s critical infrastructure and will take the lead in evaluating these vulnerabilities and coordinating with federal, state, local and private partners to ensure the most effective response. Vermont Emergency Management Division (VEM) will facilitate and coordinate state level response support for all hazards incidents that exceed local capability to resolve.

The state of Vermont will apply all the resources available from the various federal, state and local preparedness programs to address unique planning, equipment, training and exercise needs. These programs assist in building enhanced and sustainable capabilities to prevent, protect, respond to and recover from any all hazards incident or pre-planned event.

The September 11th, Oklahoma City, Madrid, London and 1993 World Trade Center attacks highlighted the fact that domestic and international terrorist groups have the resources and commitment to operate with deadly accuracy anywhere in the world. A terrorist committed to a cause, whether acting alone or on behalf of an international terrorist organization, can cause mass casualties, economic instability, long-term contamination of the environment and disabling of critical infrastructure. Non-terrorism related catastrophic incidents such as Hurricanes Katrina and Rita, an influenza pandemic or a nuclear power plant failure suggest that the same effects can be experienced from natural or accidental causes.

Vermont adheres to an all hazards approach to disaster response. It is understood that no single agency or level of government has all the necessary resources to effectively prepare for, respond to and recover from the effects of a large-scale disaster, such as Hurricanes Katrina and Rita in 2005. The vision of the State Strategy is to bring together first response resources, government, private sector and citizens to effectively plan for, prevent, protect, respond to and recover from any all hazards incident. Vermont has identified key stakeholders who participate in developing and enhancing emergency responder capabilities that are in line with all of the National Priorities. These stakeholders actively participate in this process to ensure all perspectives are considered, resulting in a better prepared state.

History has demonstrated that catastrophic events can quickly overwhelm all entities of government and first responders. One example of Vermont taking a proactive step relating to disaster response was in 2006 when the Governor of Vermont signed into legislation the creation of four Public Safety Districts. Vermont’s State Emergency Operations Plan conceptualized Regional Coordination Centers within each district. In a catastrophic regional or statewide event when the State Emergency Operations Center may be overwhelmed, these centers will coordinate resources between state and local jurisdictions during catastrophic events. These Regional Coordination Centers are currently being identified, equipped and staffed. The centers will be exercised once they are equipped and staffed.

Public Safety personnel face many challenges as they strive to protect Vermont’s citizens, critical infrastructure, historic landmarks and way of life. Vermont’s northern border, entirely with Canada, is approximately 89 miles in length and is comprised of land area as well as two large bodies of water: Lake Champlain and Lake Memphremagog. Both lakes define a portion of the Vermont/Canadian border and provide recreational access to both countries. Lake Champlain is part of the Intracoastal Waterway and is the nation’s sixth largest lake. Montreal, Quebec, with a population of 3.4 million, is the closest large city and is located 72 miles north of the international border and approximately 110 miles from Burlington, Vermont’s largest city. Vermont has two interstate highway systems that serve as major transportation corridors through which high volumes of commercial motor vehicles travel to both Quebec and Montréal. Vermont is also connected to Canada through an international railroad system. During the winter months, heavy snowfall can make a portion of the border region inaccessible. The two major lakes can freeze during winter months, making them accessible by foot, ATV, snowmobile or other means and thus potentially exploited by criminals. The porosity of the border and the known existence of criminal organizations (to include terrorist cells) within two hours of the Vermont/Canadian border make it a concern for law enforcement. Natural disasters that have previously occurred within the northeastern United States and eastern Canadian Provinces provide information about what Vermont can reasonably expect and the damages that may result during all hazards incidents. Examining disasters that have occurred throughout the nation provides useful information for planning purposes. Such potential hazards have been inventoried and assessed to include: flooding, ice storms and other extreme weather events. Vermont also frequently responds to a variety of Hazardous Material incidents, such as tractor trailer and rail incidents.

The Governor of Vermont has designated the Vermont Department of Public Safety as the State Administrative Agency (SAA) and the Commissioner of Public Safety as the State Administrative Agent for the State Homeland Security functions. The Director of the Homeland Security Unit has been designated as the Homeland Security Advisor. The Governor’s Homeland Security Advisory Council (GHSAC) was formed through Executive Order by the Governor of Vermont on February 20, 2003 and updated in 2007. The Council includes members from the following communities as appointed by the Governor: Volunteer Firefighters / EMS, Professional Firefighters,
Career Fire Chiefs, Vermont State Police, Municipal Police, Sheriffs, Federal Government, Municipal Government,
and Private Community Organizations. The Council also includes the following members or their designees: The
Adjutant General, Director of Emergency Management, Secretary of Administration, Speaker of the House and a
member of the Senate. The Secretary of Civil and Military Affairs, the Commissioner of Health, and the
Commissioner of Public Safety are ex officio members of the Council. The GHSAC receives updates from the
Director of Vermont Homeland Security on local and regional issues and the distribution of federal homeland
security grants.
Vermont has developed and continues to utilize the State NIMS Implementation Plan. The Vermont Public Safety
Academies are tasked with delivery of ICS training. Vermont currently trains with and utilizes the National Incident
Management System developed by FEMA, US Department of Agriculture, National Wildfire Coordinating Group
and the National Fire Administration. Training is offered to first and second responders, emergency support
personnel and non-governmental organizations who request the training through the two Public Safety Academies.
Vermont is currently in the process of training responders in ICS position specific roles. Vermont will utilize the
FEMA train the trainer model for ICS position specific training.
The state has created four Public Safety Districts that are geographically aligned with the Vermont State Police
Troop Areas. Each District is managed by the respective State Police Troop Commander. Troop Commanders have
been designated as the Public Safety District Coordinators. The Public Safety District Coordinators will discharge
emergency management powers within their district to ensure that situational awareness is maintained, a
communications plan exists, the Incident Command System is utilized, the intelligence function is used, provide
support and coordination with local command and implement the state infrastructure protection plan in any multijurisdictional
response to a major or catastrophic crisis.