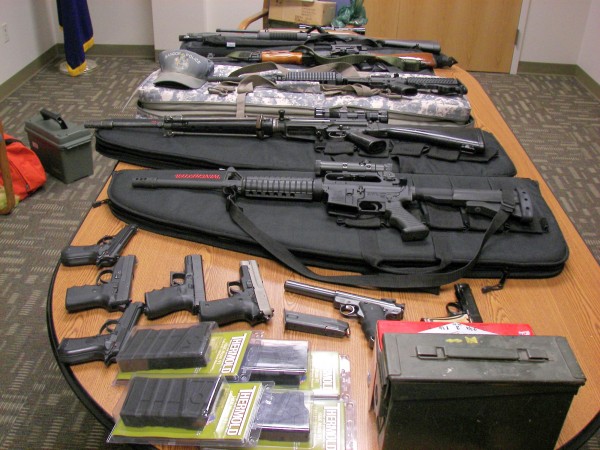 An example photo of a “weapons cache” included in a Department of Homeland Security and FBI bulletin to law enforcement. Photo via Maine State Police.

A joint bulletin issued in early August by the Department of Homeland Security and FBI warns state and local law enforcement agencies to look out for people in possession of “large amounts” of weapons and ammunition, describing the discovery of “unusual amounts” of weapons as a potential indicator of criminal or terrorist activity.

Citing the example of Norwegian mass-murderer Anders Behring Breivik, who reportedly “stockpiled approximately 12,000 pounds of precursors, weapons, and armor and hid them underground in remote, wooded locations,” the bulletin instructs law enforcement to look for “large amounts of weapons, ammunition, explosives, accelerants, or explosive precursor chemicals” that “could indicate pre-operational terrorist attack planning or criminal activity.”  Weapons do not have to be “cached” in remote locations to meet the standard for suspicious activity.  According to the bulletin, weapons could be stored in an “individual’s home, storage facility, or vehicle” and may include common firearms such as “rifles, shotguns, pistols” as well as “military grade weapons.”  The illegal possession of large amounts of ammunition is also listed as a potential indicator of “criminal weapons possession related to terrorism.”  While the bulletin never clarifies what constitutes a “large” or “unusual” quantity of weapons or ammunition, it does say that such a quantity would “arouse suspicion in a reasonable person.”

The joint DHS-FBI Roll Call Release distributed to police, first responders and private security throughout the U.S. is part of a series of bulletins describing activities “reasonably indicative of criminal activity associated with terrorism.”  The suspicious activities described in the bulletins are derived from criteria in the Information Sharing Environment (ISE) Functional Standard for Suspicious Activity Reporting signed in 2009.  The ISE Functional Standard governs the collection of information for the Nationwide Suspicious Activity Reporting Initiative (NSI), an interagency program to collect suspicious activity reports from law enforcement agencies around the country.  Other bulletins in the series focus on everything from surveillance and theft to photography and even “eliciting information,” an activity described as “questioning individuals at a level beyond mere curiosity.”

Like other bulletins in the DHS-FBI series on suspicious activity reporting, the document notes that “constitutional activities should not be reported” unless the circumstances “support the source agency’s suspicion that the behavior observed is not innocent, but rather reasonably indicative of criminal activity associated with terrorism, including evidence of pre-operational planning related to terrorism.”  However, no guidance is provided on potential legal issues related to the reporting of constitutionally-protected activities.