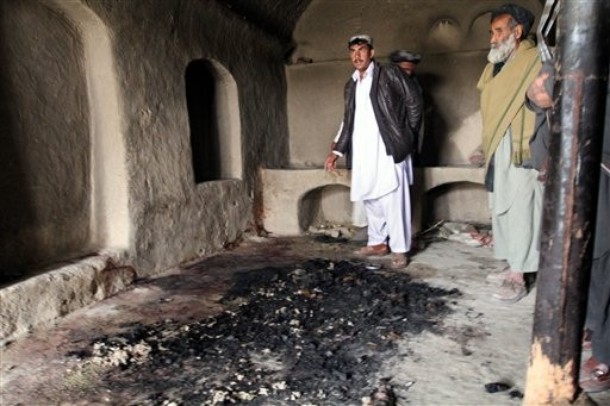 In this Sunday, March 11, 2012 photo, men stand next to blood stains and charred remains inside a home where witnesses say Afghans were killed by a U.S. soldier in Panjwai, Kandahar province south of Kabul, Afghanistan. (AP Photo/Allauddin Khan)

The lawyer for the soldier accused of massacring seventeen people in a small Afghan village earlier this month has stated publicly that there is little or no evidence against his client.  John Henry Browne, who is defending Staff Sergeant Robert Bales, told NBC that the U.S. government’s prosecution of Bales will be difficult as “They have no bodies, they have no autopsies, they have no forensics, they have no photographs, they have no witnesses. There is no Afghan who is going to come here to testify against this guy, so how do they prove premeditation? It’s going to be a problem for them.”  In an interview with CBS, Browne reiterated this claim stating “There is no crime scene. There is no CSI stuff. There’s no DNA. There’s no fingerprints.”  Browne has also stated that there is “no evidence about how many alleged victims” or “of where those remains are.”

Given the state of war and turmoil in Afghanistan, this complete absence of evidence might seem plausible to those unfamiliar with the Afghan justice system or the military’s on-the-ground capabilities in the region.  However, for a number of years the U.S. military has operated complex forensic facilities in every region of Afghanistan capable of fingerprint and DNA analysis, ballistics testing, forensic chemistry and more.  In fact, collecting complex evidence to be used in the trials of Afghan insurgents is a common practice for U.S. soldiers.  Both the U.S. Army and ISAF have issued guides to soldiers regarding the collection of evidence in support of prosecution of insurgency crimes.

ISAF’s evidence collection guide details how to interview witnesses, perform chemical tests, collect DNA evidence, photograph the crime scene, analyze tire marks and footprints and how to eventually turn all this evidence over to Afghan courts while maintaining a chain of custody.  The U.S. Army’s guide similarly details sophisticated methods of evidence collection by “providing practical means and methods to properly identify, collect, preserve, and provide evidence that will be recognized and accepted by the Afghan criminal justice system.”  A presentation from the U.S. Army’s Office of the Provost Marshal General indicates that as of August 2011 there were three Joint Expeditionary Forensics Facilities (JEFFs) throughout Afghanistan including one in Kandahar, the same province where Staff Sgt. Bales reportedly committed the massacre.  These forensics facilities are capable of DNA analysis, latent print identification, photographic forensics, as well as chemical and ballistic analysis.  The presentation also indicates that there are centralized crime labs operated in coordination with the Afghan government capable of many of the same methods of forensic analysis.

While Browne’s claims could simply reflect that the U.S. military’s investigation of the incident is still in an early stage, the supposed lack of evidence is troubling given that many witnesses still maintain that more than one person was involved in the massacre, a belief supported by Afghan President Hamid Karzai.  After meeting with the victims’ family members, Karzai said that they did not believe it was possible for one man to kill seventeen people in different rooms of houses in multiple villages, drag the bodies into piles and burn them within such a limited period of time.   According to the Washington Post, survivors of the massacre have told family members that “There were 10 soldiers in our neighborhood alone.”  An Afghan parliamentary investigation found that it was widely reported by witnesses that up to twenty soldiers may have been involved and the BBC reported that residents heard helicopters that they believe were supporting the operation.

Though Staff Sgt. Bales has now been charged with seventeen counts of premeditated murder, it remains to be seen whether the U.S. military will present the same level of forensic evidence that it routinely collects and analyzes when attempting to prosecute suspected insurgents.