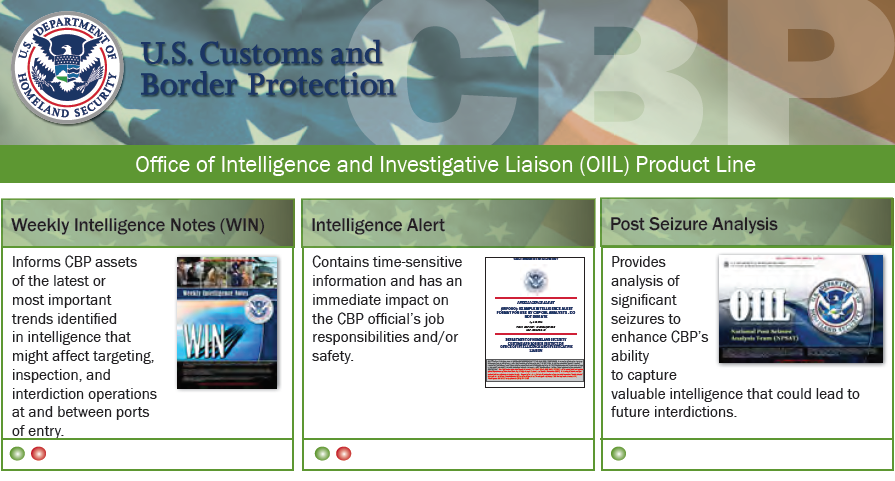 A page from the 2012 DHS Intelligence Enterprise Product Line Brochure details several varieties of Customs and Border Protection intelligence products available to those with the proper clearance.

The Department of Homeland Security’s production of domestic intelligence has increased substantially over the last few years according to a brochure of “intelligence products” published last month by Cryptome. The 2012 DHS Intelligence Enterprise Product Line Brochure is “a standardized catalogue of intelligence reports and products that represent the full breadth” of the agency’s analytical capabilities.  It provides descriptions of each type of product created by the DHS Intelligence Enterprise as well as the classification level and instructions on how DHS “customers” can obtain the products.

The brochure describes more than fifty intelligence product lines from seven DHS components including the U.S. Coast Guard, Customs and Border Protection and the Secret Service.  The classifications of the products range from unclassified to Top Secret with more than thirty product lines being produced with classified material.  Readers of Public Intelligence and other websites that publish government documents will likely recognize a number of the products, such as the DHS Office of Intelligence and Analysis (OIA) Snapshot series or Roll Call Releases.  However, the brochure describes dozens of intelligence products from parts of the government that you may not have known were components of DHS.  For example, the U.S. Coast Guard Intelligence Coordination Center produces thirteen separate intelligence product lines, some of which are released daily.  U.S. Customs and Border Protection and DHS OIA each produce twelve separate intelligence product lines.  The Transportation Security Administration and U.S. Citizenship and Immigration Services each produce an assortment of products, from colorful posters to “fast-paced” intelligence videos designed to inform stakeholders of “recent intelligence reporting, terrorism trends, and terrorist incidents.”

In 2008, a report produced by the RAND Corporation on behalf of the DHS OIA recommended that a “domestic intelligence agency” be created for combating terrorism.  A 2006 strategic plan for the DHS Intelligence Enterprise authored by then Chief Intelligence Officer Charles E. Allen stated that DHS planned to “provide valuable, actionable intelligence and intelligence-related information for and among the National leadership, all components of DHS, our federal partners, state, local, territorial, tribal and private sector customers” by developing systems for the collection, analysis and production of intelligence products for DHS stakeholders.  Allen, who formerly served as Assistant Director of Central Intelligence for Collection, stated in the plan that he would be a “forceful advocate for intelligence within the Department, with the Intelligence Community, the Office of Management and Budget, our Congressional Oversight Committees as well as with our State, Local, Tribal, and Territorial and Private Sector customers.”

A report released last week by the Senate Permanent Subcommittee on Investigations found that the nationwide network of state and local intelligence fusion centers created by DHS have produced little in the way of actionable intelligence relating to terrorist threats.  Surveying fusion center reports from a thirteen month span between April 1, 2009 to April 30, 2010, the subcommittee investigation “could identify no reporting which uncovered a terrorist threat, nor could it identify a contribution such fusion center reporting made to disrupt an active terrorist plot.”  The Senate report states that one former Senior Reports Officer cited the volume of “useless” information as a significant problem with DHS’ domestic intelligence collection:

With over seventy fusion centers around the country, many producing nationally distributed intelligence reports, and more than fifty separate intelligence product lines produced by DHS components, the sheer volume of reporting has the potential to overload law enforcement, making them less attentive to legitimate threats and ultimately making us less safe.