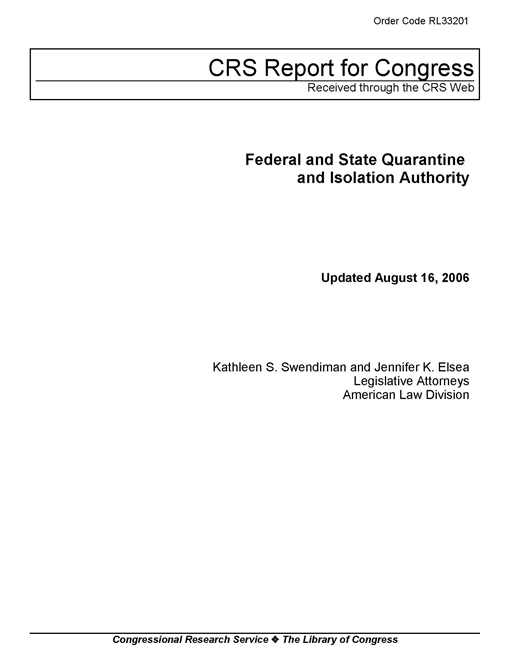 In the wake of recent terrorist attacks and increasing fears about the spread of highly contagious diseases, such as severe acute respiratory syndrome (SARS) and pandemic influenza, federal, state, and local governments have become increasingly aware of the need for a comprehensive public health response to such events. An effective response could include the quarantine of persons exposed to infectious biological agents that are naturally occurring or released during a terrorist attack, the isolation of infected persons, and the quarantine of certain cities or neighborhoods. The public health authority of the states derives from the police powers reserved to them by the Tenth Amendment to the U.S. Constitution. The authority of the federal government to prescribe quarantine and other health measures is based on the Commerce Clause, which gives Congress exclusive authority to regulate interstate and foreign commerce. Thus, state and local governments have the primary authority to control the spread of dangerous diseases within their jurisdictions, and the federal government has authority to quarantine and impose other health measures to prevent the spread of diseases from foreign countries and between states. In addition, the federal government may assist state efforts to prevent the spread of communicable diseases if requested by a state or if state efforts are inadequate to halt the spread of disease. Some state laws are antiquated and, until recently, have not been reviewed to address the spread of disease resulting from a biological attack. Other state laws do not cover newly emerging diseases such as SARS or pandemic influenza. In light of recent events, however, many states are reevaluating their public health emergency authorities and are expected to enact more comprehensive laws relating to quarantine and isolation. Public health experts have developed a Model State Emergency Health Powers Act to guide states as they reevaluate their emergency response plans.

This report provides an overview of federal and state public health laws as they relate to the quarantine and isolation of individuals, a discussion of constitutional issues that may be raised should individual liberties be restricted in a quarantine situation, and federalism questions that may arise where federal and state authorities overlap. In addition, the possible role of the armed forces in enforcing public health
measures is discussed, specifically whether the Posse Comitatus Act would constrain any military role, and other statutory authorities that may be used for the military enforcement of health measures.

One very simple principle [justifies state coercion]. That principle is, that the sole end for which mankind are warranted, individually or collectively, in interference with the liberty of action of any of their number, is self-protection. That the only purpose for which power can be rightfully exercised over any member of a civilized community, against his will, is to prevent harm to others.
John Stuart Mill (1856)

The practice of avoiding persons with contagious diseases may be found in the oldest of writings, including Leviticus and Numbers in the Old Testament, wherein specific instructions are given for the inspection and sequestration of lepers. The term “quarantine” is derived from the Italian words quaranta giorni, which refer to the 40-day period during which certain ships arriving at the port of Venice during the Black Death plague outbreaks of the 14th century were obliged to sit at anchor before any persons or goods were allowed to go ashore. Following a plague epidemic in London in 1664, England passed rigorous quarantine laws. All quarantined vessels were required to show a solid yellow flag to indicate they were under quarantine. As late as 1721, some ships coming to England from infected areas were burned at sea.
The earliest evidence of quarantine in colonial America occurred in the Massachusetts Bay Colony in 1647, when vessels from the West Indies were forbidden to land or discharge passengers and cargo during a plague outbreak. The first federal quarantine law was passed in 1796 in response to continued yellow fever epidemics.

Constitutional Issues
The preservation of the public health has historically been the responsibility of state and local governments. Although the federal government has the authority to authorize quarantine under certain circumstances, the primary authority exists at the state level as an exercise of the state’s police power. The 4th Congress appears to have recognized this principle when, in 1796, it debated whether to authorize the President to establish regulations to impose quarantines at ports of entry. After opponents argued that the authority belonged to the states, Congress passed a law authorizing the President to assist states in enforcing their health laws, which it soon replaced with a law requiring certain federal officials to observe restraints and quarantines imposed by state laws and to aid state officials in their execution. In 1824, the Supreme Court alluded to a state’s authority to enact quarantine laws in Gibbons v. Ogden. In Gibbons, the Court noted that although quarantine laws may affect commerce, they are, by nature, health laws, and thus fall under the authority of state and local governments. Courts have noted that the duty to ensure that the public health is preserved is inherent to the police power of a state and cannot be surrendered. However, the Supreme Court has recognized that state health laws that intrude on a matter within Congress’s power to legislate must give way under the Supremacy Clause.

The federal or state origin of quarantine laws may influence the means and methods of their enforcement. The Constitution does not expressly vest the executive branch with the authority to execute state laws, and the federal government has no authority to order state officials to execute federal law.17 Article IV, § 4, guarantees federal assistance to states only in cases of invasion or insurrection, or at the request of the state legislature (or the executive, if the legislature cannot be convened) in the case of “domestic violence.” The Tenth Amendment provides that powers not expressly vested in the federal government are retained by the states or the people. It may be argued that a distinctly federal interest must exist before Congress can legislate with respect to public health and that, although the Constitution does not expressly say so, federal law enforcement officers may not ordinarily enforce state laws without the permission of the state government.

Federal and state quarantine laws are also subject to constitutional due process constraints. The Fifth and Fourteenth Amendments prohibit governments at all levels from depriving individuals of any constitutionally protected liberty interest without due process of law. What process may be due under certain circumstances is generally determined by balancing the individual’s interest at stake against the governmental interest served by the restraints, determining whether the measures are reasonably calculated to achieve the government’s aims, and deciding whether the least restrictive means have been employed to further that interest. In addition, some have suggested that military enforcement of quarantines raises additional civil liberties concerns. These aspects are discussed more fully below.

In light of recent concerns that a strain of avian influenza could mutate to cause a pandemic, President Bush has suggested that Congress should authorize him to employ military forces to enforce any quarantine that might become necessary in the event of an outbreak in the United States. President Bush also suggested that the National Guard might be employed under federal rather than state control to carry out measures to contain such an outbreak. Critics of the proposal have expressed concern that an additional exception to the Posse Comitatus Act, which prohibits active military personnel from carrying out certain law enforcement activities without express statutory authority, would lead to a form of martial law, with the attendant threats to civil liberties.

The Posse Comitatus Act, 18 U.S.C. § 1385, punishes those who, “except in cases and under circumstances expressly authorized by the Constitution or Act of Congress, willfully use any part of the Army or the Air Force as a posse comitatus or otherwise to execute the laws.” Some view the act as the embodiment of the American tradition that abhors the use of soldiers to compel citizens to obey the law. Yet the Constitution does not explicitly bar the use of military forces in civilian situations or in matters of law enforcement; in fact, it empowers Congress to provide for calling forth the militia to execute federal law. Courts have held that, absent a recognized exception, the Posse Comitatus Act is violated when (1) civilian law enforcement officials make “direct active use” of military investigators, (2) the use of the military “pervades the activities” of the civilian officials, or (3) the military is used to subject citizens to the exercise of military power that is “regulatory, prescriptive, or compulsory in nature.” To the extent that quarantine enforcement measures involve the compulsion of civilians to remain in or leave an area, for example, it appears that the Posse Comitatus Act would be implicated. Thus, unless a pandemic were to lead to significant civil unrest or call for other military activity already authorized pursuant to existing exceptions, Congress would have to enact a law to authorize military enforcement of health measures.

The act does not prohibit activities conducted for a military purpose, which could encompass restrictions implemented on bases or to control a communicable disease affecting service members. The Posse Comitatus Act does not apply to the National Guard unless it is employed in federal service as a reserve force of the armed forces. If the National Guard is called up to enforce U.S. laws, however, it is not subject to the Posse Comitatus Act.

The President could use the Insurrection Act to enforce health measures in the event that civil officials were overwhelmed during a pandemic and unable to enforce those laws.