The following bulletin from the Los Angeles Joint Regional Intelligence Center was released by Anonymous on December 5, 2011.  The manual “Crowd Control and Riot Manual” from Warrior Publications that is described in the bulletin is available for download from Quiver Distro (PDF, 11.7 MB). 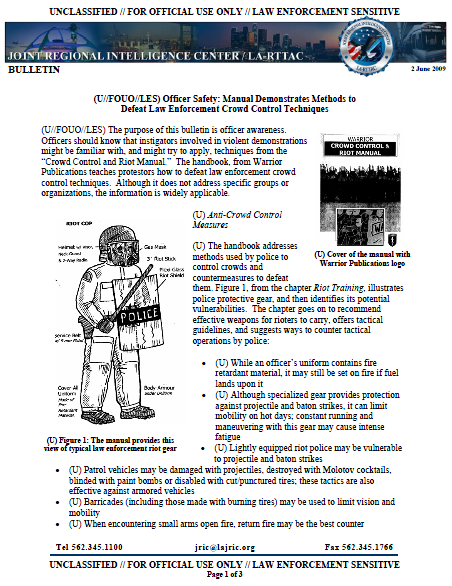 (U//FOUO//LES) The purpose of this bulletin is officer awareness. Officers should know that instigators involved in violent demonstrations might be familiar with, and might try to apply, techniques from the “Crowd Control and Riot Manual.” The handbook, from Warrior Publications teaches protestors how to defeat law enforcement crowd control techniques. Although it does not address specific groups or organizations, the information is widely applicable.

(U) The handbook addresses methods used by police to control crowds and countermeasures to defeat them. Figure 1, from the chapter Riot Training, illustrates police protective gear, and then identifies its potential vulnerabilities. The chapter goes on to recommend effective weapons for rioters to carry, offers tactical guidelines, and suggests ways to counter tactical operations by police:

• (U) While an officer’s uniform contains fire retardant material, it may still be set on fire if fuel lands upon it
• (U) Although specialized gear provides protection against projectile and baton strikes, it can limit mobility on hot days; constant running and maneuvering with this gear may cause intense
• (U) Lightly equipped riot police may be vulnerable to projectile and baton strikes
• (U) Patrol vehicles may be damaged with projectiles, destroyed with Molotov cocktails, blinded with paint bombs or disabled with cut/punctured tires; these tactics are also effective against armored vehicles
• (U) Barricades (including those made with burning tires) may be used to limit vision and mobility
• (U) When encountering small arms open fire, return fire may be the best counter • (U) The best response to a baton charge is a heavy barrage of projectiles and the use of barricades
• (U) If an arrest squad (also called a “snatch squad”) is identified, they should be targeted with a heavy barrage of projectiles when they exit police lines
• (U) The use of individual riot weapons is important; primary targets are commanders, ARWEN gunners, snatch squads and K-9 units, as none of these typically carry shields (see
Figure 2)
•  (U) Against riot police, the 3’ long Hambo (also known as a long baton) is a preferred weapon to break through Plexiglas shields and visors: metal pipes or aluminum baseball bats are also good, as they have solid impact against riot armor
•  (U) Pepper/bear spray is good against police not wearing gas masks, as well as vigilante citizens
• (U) Slingshots are useful against both vehicles and police; when used against people, they should be aimed at the face
• (U) Improvised paint bombs (condoms, empty eggs, spray paint cans) are effective when thrown at masks, visors or shields
• (U) Additional effective projectiles include concrete/bricks, flares, fireworks, bottles and rocks
• (U) Projectiles should be thrown from the front of a crowd to avoid injuring cohorts
• (U) In order to escape arrest, team members should practice and rehearse holds, locks, strikes and escaping from holds and locks; individuals should fight back and attempt escape
• (U) Ambushes can be laid for police if the opportunity arises; assailants can hide behind a corner, vehicle, in a building entrance, roof-top, overhanging bridge, etc.