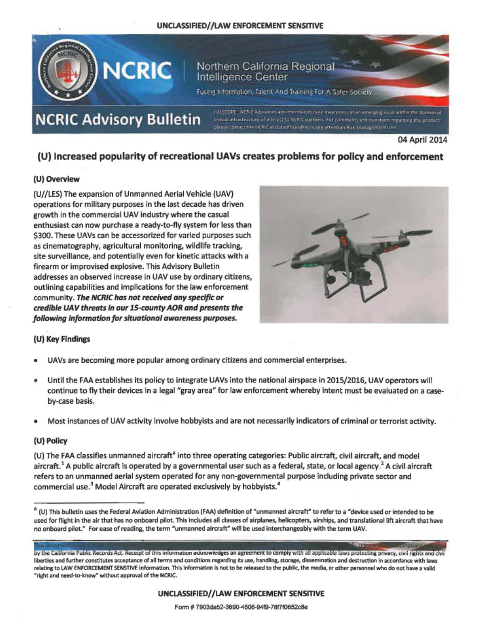 (U//LES) The expansion of Unmanned Aerial Vehicle (UAV) operations for military purposes in the last decade has driven growth in the commercial UAV industry where. the casual enthusiast can now purchase a ready-to-fly system for less than $300. These UAVs can be accessorized for varied purposes such as cinematography, agricultural monitoring, wildlife tracking, site surveillance, and potentially even for kinetic attacks with a firearm or improvised explosive. This Advisory Bulletin addresses an observed increase in UAV use by ordinary citizens, outlining capabilities and implications for the law enforcement community. The NCRIC has not received any specific or credible UAV threats in our 15-county AOR and presents the following information for situational awareness purposes.

• UAVs are becoming more popular among ordinary citizens and commercial enterprises.
• Until the FAA establishes its policy to integrate UAVs into the national airspace in 2015/2016, UAV operators will continue to fly their devices in a legal”gray area” for law enforcement whereby Intent must be evaluated on a case-by-case basis.
• Most instances of UAV activity involve hobbyists and are not necessarily indicators of criminal or terrorist activity.

(U) Current FAA policy requires a UAV operator to obtain authority for operations under one of three programs. For a UAV operating as public aircraft the authority comes from a Certificate of Waiver or Authorization (COA). For UAVs operating as civil aircraft, authority is derived from a Special Airworthiness Certificate and covers only research or training operations. Model Aircraft flights are governed by the Model Aircraft Operations Standards Advisory Circular 91-57. The FAA targets full integration of UAVs into the National Airspace System by September 30, 2015.

(U) Due to the complexities and narrow criteria required to obtain a Special Airworthiness Certificate for civil operations, an ordinary citizen will most likely operate a UAV under the guidelines outlined in Model Aircraft Operations Standards Advisory Circular 91-57 (AC 91-57). While this document does not place limits on aircraft size, the advisory applies only to recreational and hobby uses. AC 91-57 includes provisions for maintaining line-of-sight communications with the craft, flying below 400 feet, and also prohibits commercial gains from any model aircraft operations. The standards in AC 91-57 state that operators should select a flight zone that is of sufficient distance from populated areas and that flying a model craft within three miles of an airport requires notification of the airport operator or air traffic controller. It should be noted that AC 91-57 does not carry the weight of law and only encourages voluntary compliance.

(U//FOUO) The recent disposition of the first case in which the FAA prosecuted a civil operator of a model airplane with a camera attached shows the Administration’s weak enforcement authority. In 2011 Raphael Pirker was flying his Rightwing Zephyr model aircraft to take pictures of the University of Virgmia Medical Center, a task for which he was paid. The FAA would typically send Pirker a “cease and desist” letter as it usually does to entities operating UAVs for commercial purposes. However in this case, the FAA sought to assess Pirker a civil penalty of $10,000 for violating Section 91.13(a) of the Federal Aviation Regulations (FAR) which states that “no person may operate an aircraft in a careless or reckless manner so as to endanger the life or property of another.” Pirker asserted that he was operating a model aircraft rather than a UAV and filed a Motion to Dismiss the charges against him based on the fact that Federal Aviation Regulations do not have authority over model aircraft flight operations. On March 6, 2014 a judge from the National Transportation Safety Board -the agency charged with investigating and prosecuting all civil aviation-related incidents- granted Pirker’s Motion to Dismiss. The judge found that there does not exist an enforceable FAA rule or FAR that applies to model aircraft or for classifying model aircraft as a UAV. The dismissal of the Pirker case may embolden commercial UAV operators who interpret the ruling to mean that they can fly with impunity.

(U) Out-of-the box UAV systems are freely available for purchase on manufacturer websites or through online retailers. Platforms range in quality from battery-operated toys mounted with cameras to diesel-powered craft capable of handling 20-pound payloads. Fixed-wing and multi-rotor devices can fly pre-programmed routes or via data link with flight times ranging from 5 minutes to 54 hours. The motion stability of multi-rotor systems is particularly attractive for collecting high-quality video. Typical Wifi data link range is line-of-sight or about 1000 feet. Transmitter, receiver, and antenna upgrades on radio controlled models can extend the range up to 3 miles. It should also be noted that most small UAVs run on electric power and do not generate much noise, making them difficult to detect.

(U//LES) UAVs have been used in the vicinity of critical infrastructure to gather visual information. The following examples demonstrate that commercially available (sometimes homemade) systems have the capability to conduct surveillance on protected assets.