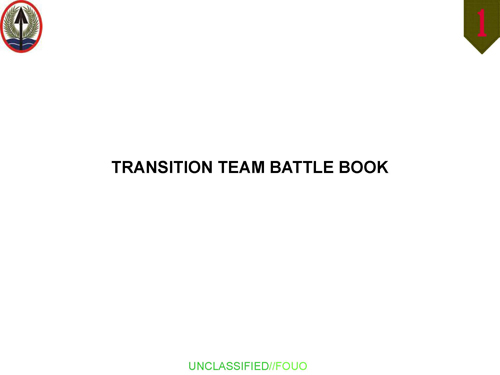 Directorate of Cultural Influence and Counterinsurgency

1. Troop-Leading Procedures (TLPs). Troop-leading procedures are used by leaders to prepare their unit for a mission. Many of the things that need to be done, such as pre-combat checks (PCCs) and pre-combat inspections (PCIs), may already be in unit SOPs since they are fairly standard from mission to mission. In situations where the missions conducted are similar to each other, such as tactical convoy operations on known routes, much of the planning may be completed beforehand and merely updated for each new mission. The use of SOPs, drills, and pre-mission preparation (e.g., detailed strip maps) will reduce the time required to prepare for a new assignment, particularly when lead times are often short. The TLPs are:

2. Conduct Rehearsals (SOPs). (NOTE: All can be done with or without troops.)

a. Based on PCCs.

b. Conducted by leaders.

d. Discuss key aspects of mission with soldiers during PCIs to ensure understanding.

1. You may engage the following individuals based on their conduct:

a. Persons who are committing hostile acts against CF.

b. Persons who are exhibiting hostile intent towards CF.

2. These persons may be engaged subject to the following instructions:

a. Positive Identification (PID) is required prior to engagement. PID is a reasonable certainty that the proposed target is a legitimate military target. If no PID, contact your next higher commander for decision.

b. Use Graduated Measures of Force. When time and circumstance permit, use the following degrees of graduated force when responding to hostile act/intent: (1)shout verbal warnings to halt; (2)show your weapon and demonstrate intent to use it; (3)block access or detain; (4)fire a warning shot; (5)shoot to eliminate threat.

c. Do not target or strike anyone who has surrendered or is out of combat due to sickness or wounds.

d. Do not target or strike hospitals, mosques, churches, shrines, schools, museums, national monuments, and any other historical and cultural sites, civilian populated areas or buildings UNLESS the enemy is using them for military purposes or if necessary for your self-defense.

e.Do not target or strike Iraqi Infrastructure (public works, commercial communication facilities, dams), Lines of Communication (roads, highways, tunnels, bridges, railways) and Economic Objects (commercial storage facilities, pipelines) UNLESS necessary for self-defense or if ordered by your commander. If you must fire on these objects, fire to disable and disrupt rather than destroy.

3. The use of force, including deadly force, is authorized to protect the following:

• Yourself, your unit, and other friendly forces
• Detainees
• Civilians from crimes that are likely to cause death or serious bodily harm, such as murder or rape
• Personnel or property designated by the OSC when such actions are necessary to restore order and security

4. In general, WARNING SHOTS are authorized ONLY when the use of deadly force would be authorized in that particular situation.

5. Treat all civilians and their property with respect and dignity.Do not seize civilian property, including vehicles, unless the property presents a security threat. When possible, give a receipt to the property’s owner.

6. You may DETAIN civilians based upon a reasonable belief that the person: (1) must be detained for purposes of self-defense; (2) is interfering with CF mission accomplishment; (3)is on a list of persons wanted for questioning, arrest or detention; (4)is or was engaged in criminal activity; or (5)must be detained for imperative reasons of security.Anyone you detain MUST be protected. Force, up to and including deadly force, is authorized to protect detainees in your custody. You MUST fill out a detainee apprehension card for EVERY person you detain.

7. MNC-I General Order No. 1 is in effect. Looting and the taking of war trophies are prohibited.

8. ALL personnel MUST report any suspected violations of the Law of War committed by any US, friendly or enemy force. Notify your chain of command, Judge Advocate, CID, IG, or Chaplain.

• Coalition Forces are authorized to detain civilians for imperative threat to security
• Capturing units will only detain persons when there is a reasonable belief that the person:
– Is or was engaged in criminal activity
– Interferes with Coalition mission accomplishment
– Is on a list of persons wanted for questioning, arrest or detention by MNF for imperative reasons of security, or
– Is an enemy combatant or unlawful combatant
• Persons may also be detained if they:
– Are pending criminal prosecution through the Iraqi Criminal System for anti-coalition activities, or
– Have valuable information or intelligence on:
• The whereabouts of former regime members, terrorists, or insurgents, or
• Impending insurgent activity when that information represents a threat to security

• Disarm
• Search
• Confiscate any weapons, nearby mobile phones and computer equipment that might belong to the detainee
• Tag all detainees, their possessions, and any physical evidence taken
• Inform the detainee of the reason for detention
• Report
– Complete a CPA Apprehension Form
– Must include sworn statements from at least two witnesses
– Report the capture through MNC-I, PMO (U.S.) through operational channels within 48 hours of capture
• Transfer all detainees, their possessions, confiscated items, and physical evidence to the nearest holding facility as soon as possible

DO
• Be yourself. A sincere attitude makes you a better spokesperson.
• Be helpful to the media, answering questions if possible or referring themto someone who can.
• Report media contacts through your chain of command.

DON’T
• Be hostile to members of the media.
• Discuss planned operations, data such as ammunition available, numbers of soldiers available, passwords, etc.
• Make comments “off the record” or state “no comment.”

The team enters the sniper’s kill zone. A round impacts close by or a member of the team is hit. The team determines the distance and location of the sniper.

A. The team evacuates any wounded members and moves to a covered and concealed position.

B. The team leader notifies the MSC with the direction of the sniper and the location of the team.

C. The team treats the wounded and prepares for MEDEVAC.

A. The team immediately returns fire at the threat.

B. The team evacuates any wounded members and moves to a covered and concealed position.

C. The snipers position is masked with smoke.

D. The team leader notifies the MSC with the location of the sniper.

E. If possible, the building or area that the sniper is located in is cordoned off.

The team is informed of an ongoing or completed war crime involving members of the supported unit or an adjacent unit.

2. The team leader will then notify the unit commander and the battalion/brigade commander as to what took place.

4. The team leader will notify the MSC and await further instructions. 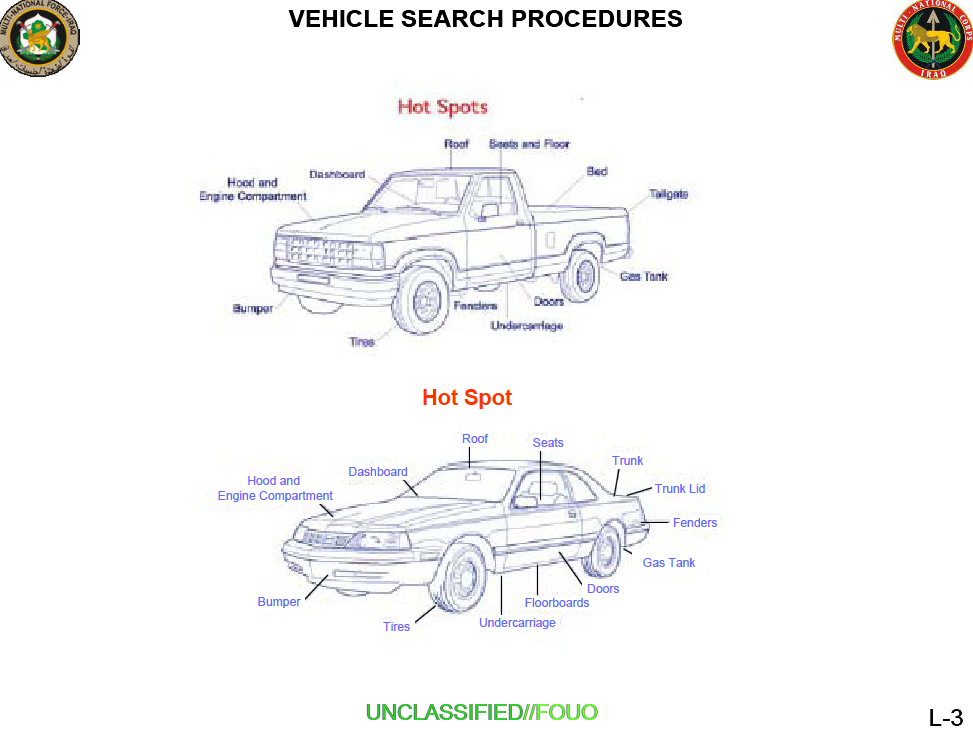 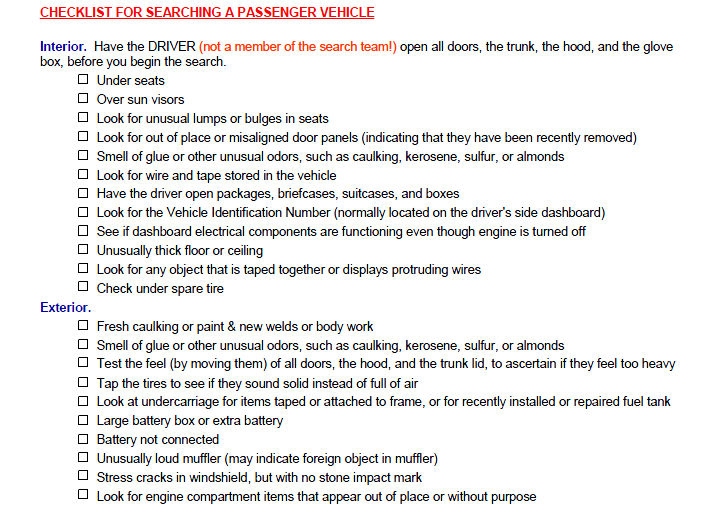 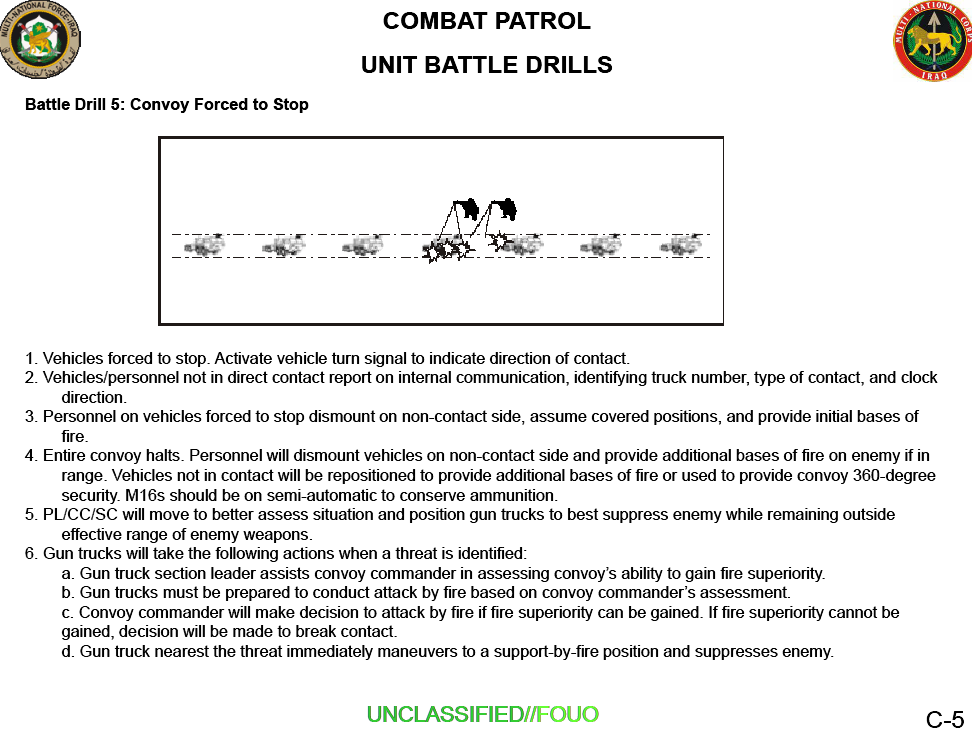