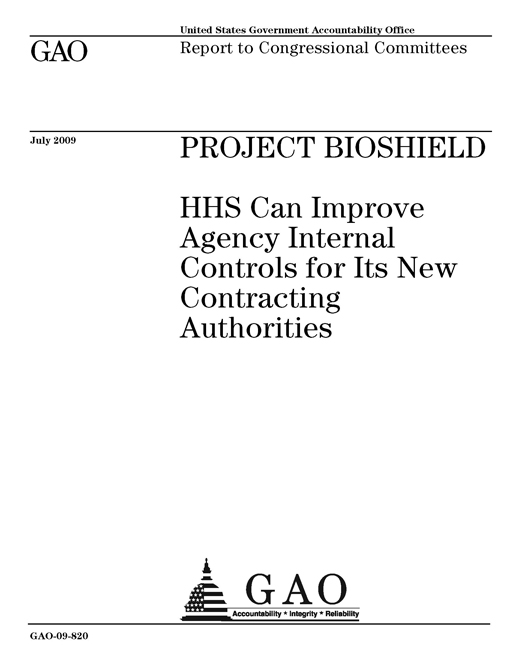 Since 2004, HHS has awarded nine contracts using its Special Reserve Fund (Fund) purchasing authority under the BioShield Act to procure countermeasures that address anthrax, botulism, smallpox, and radiation poisoning. HHS may procure countermeasures that are approved by the Food and Drug Administration and ones that are unapproved, but are within 8 years of approval. Of the nine contracts, one was terminated for convenience and the remaining eight are valued at almost $2 billion. HHS officials told GAO that additional contracts are likely to be awarded in the near future as the Fund provides funding through fiscal year 2013. In addition, HHS has used one of its new contracting authorities, simplified acquisition procedures, although it has not used this authority since 2005.

HHS has established internal controls on its new purchasing and contracting authorities. In addition to the language in the BioShield Act, which sets up a broad framework of controls over the use of the Special Reserve Fund, the internal controls for this purchasing authority are documented in a variety of internal policy and procedure documents and interagency agreements, which provide guidance on roles and responsibilities for how the controls are to be implemented. In response to BioShield Act requirements, HHS also established internal controls for three of the contracting authorities: the increased simplified acquisition threshold and its use with Special Reserve Funds, the increased micropurchase threshold, and the use of personal services contracts. Federal internal control standards state that, among other things, management needs to comprehensively identify risks, analyze them for possible effect, and determine how risks should be managed. Although some of the risk statements in a memo HHS issued identify some risks and one mentions possible negative consequences that could occur without proper controls in place, the risk statements for using the increased micropurchase threshold and increased simplified acquisition procedures lack analysis of specific risks. In particular, the memo does not discuss a key risk associated with using simplified acquisition procedures—namely, that an agency is prohibited from obtaining cost or pricing data for acquisitions at or below the simplified acquisition threshold. Without this data, the agency may not be able to determine if the price of a contract is fair and reasonable. Moreover, not having adequately documented and appropriately communicated risk assessments potentially results in future employees not knowing or understanding the risks or trade-offs involved in using the authorities. With employee turnover, HHS’ reliance on the knowledge of current personnel to appropriately implement key controls will not enable future employees to make sound, informed, and consistent decisions.

Following the attacks using anthrax-laced letters in the United States in 2001 and other biological attacks, such as the Sarin gas attack in Japan, some members of Congress were concerned that the United States was vulnerable to threats from chemical, biological, radiological, and nuclear (CBRN) agents and did not have sufficient medical countermeasures to adequately protect the public from such threats or provide post-exposure treatment. To address this gap in national defense capability, the Project BioShield Act of 2004 (BioShield Act1) provided the Department of Health and Human Services (HHS) with the ability to accelerate the research, development, acquisition, and availability of effective countermeasures (such as, vaccines, pharmaceuticals, and diagnostics) that are necessary to respond to an attack involving CBRN agents.

The BioShield Act provided HHS with a number of new authorities, including four new contracting authorities:

HHS was also authorized to use funds from a Special Reserve Fund to procure countermeasures to be added to the inventory of medical supplies and countermeasures currently stored in the Strategic National Stockpile.3 At the time of its establishment, the Fund provided HHS about $5.6 billion to use over a 10-year period (fiscal years 2004 to 2013), with a spending cap of $3.4 billion during fiscal years 2004 to 2008.4 This purchasing authority expanded the types of medical countermeasures that HHS could obtain to address threats from CBRN agents to include not only those that are approved by the Food and Drug Administration (FDA),5 but also those that are determined to be within 8 years of approval or which have been authorized for use under an emergency use authorization.6 Prior to the BioShield Act, HHS officials told us that the agency was, in general, only able to purchase medical countermeasures that were FDA approved.

HHS’ ability to use the Special Reserve Fund for the procurement of countermeasures is predicated on a six-step process involving coordination with DHS and approval by the Director of the Office of Management and Budget (OMB).8 As provided in the BioShield Act, the process requires:

2. the HHS Secretary to determine countermeasures that are necessary to protect the public health;

3. the HHS Secretary to determine that a particular countermeasure is appropriate for procurement for the Strategic National Stockpile using the Special Reserve Fund and the quantities to be procured;

4. the DHS and HHS Secretaries to jointly recommend to the Director of OMB that the Special Reserve Fund should be used for the designated countermeasure acquisitions;

5. the director of OMB to approve the use of the Special Reserve Fund; and

6. both Secretaries to notify designated congressional committees of the procurement.

The BioShield Act also provides HHS the ability to use four new contracting authorities for the acquisition of countermeasures. In general, these authorities expanded upon existing provisions in the Federal Acquisition Regulation (FAR). The four authorities are:

In 2006, the Pandemic and All-Hazards Preparedness Act12 (PAHPA), among other things, established the Biomedical Advanced Research and Development Authority (BARDA), within HHS, to provide a coordinated, systematic approach to the development and purchases of countermeasures, including vaccines, drugs, therapies, and diagnostic tools. Later, in 2009, Congress transferred the following amounts from the Special Reserve Fund to HHS accounts: $275 million to be used for the advanced research and development of countermeasures and $137 million for influenza pandemic preparation. 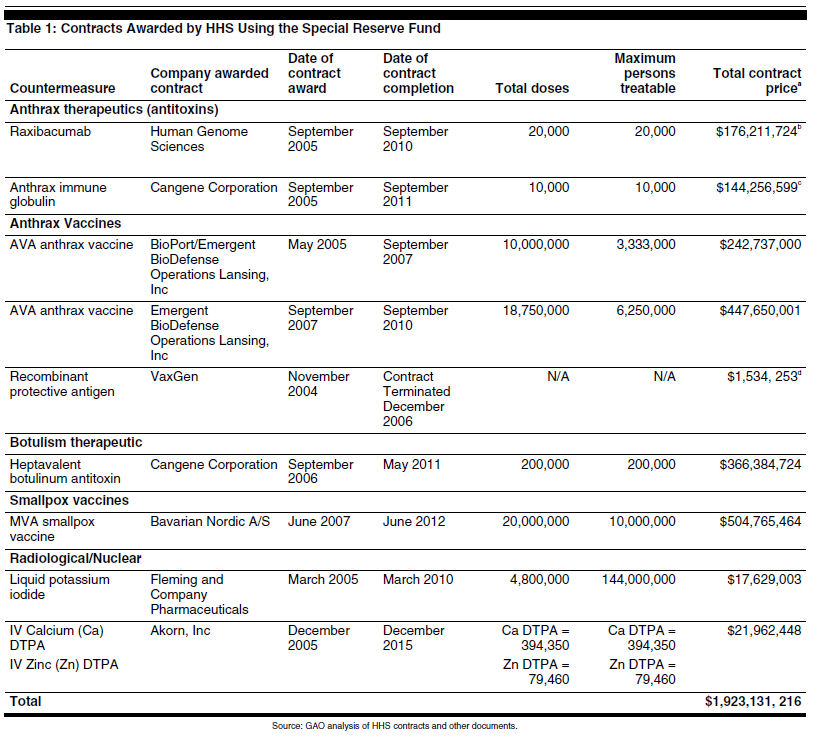 Of the four contracting authorities provided under the BioShield Act, HHS has only used the simplified acquisition procedure authority. From 2004 through 2005, HHS’s National Institutes of Health (NIH) used this authority to award five other contracts, including ones for research to develop a botulism antitoxin and improved treatments for radiation poisoning. Awarded with NIH funding, these contracts have a total value of almost $30 million when options and other later modifications are included. See table 2. 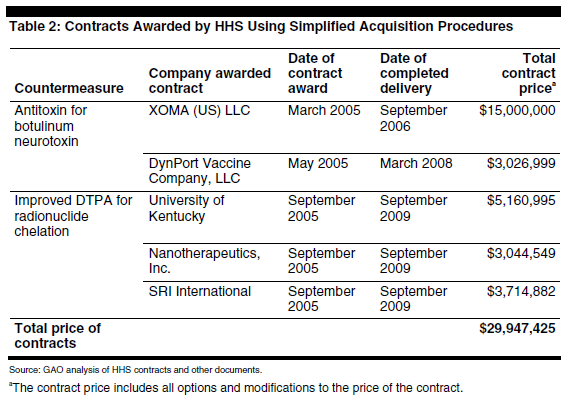